Wayne debuted at London's Roxy in March 1977, and renamed the band to The Electric Chairs. New Musical Express journalist Julie Burchill (who in later years would express anti-trans opinions) was very supportive of the band. They were the only punk act at the Reading Festival that year and played to an antagonistic audience.

After a gig with Adam and the Ants, Wayne was introduced to Derek Jarman who cast her as a transvestite rock star in his film Jubilee.

Safari Records signed the group who put out their first album, although the more controversial tracks were kept apart for a special EP, Blatantly Offenzive. Wayne's transition can be seen on the album covers of the first three albums. On The Electric Chairs, 1978, Wayne has a masculine appearance; on Man Enough to be a Woman, 1978, the two personae are juxtaposed; on Things Your Mother Never Told You, 1979, there is only a feminine version. 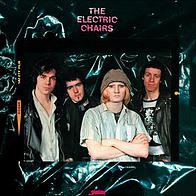 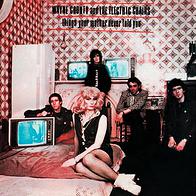 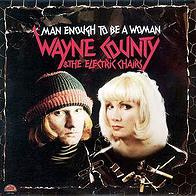 The second album, which was also issued under the name Storm the Gates of Heaven, contains "Man enough to be a Woman" but also songs against organized religion as well as a statement about County's belief in a god.


"When we recorded the second album, I was beginning to feel very strongly that I wanted to take the transsexual thing a lot further; I'd stopped doing hormones for a while and really toned down my appearance, but I wasn't happy with that. I'd got a lot of attention with the Electric Chairs, and I decided it was time to come out and be the first up-front transsexual in a rock band. The music press was really interested and supportive for a while; they'd never had this before, and they could see me changing right before their very eyes."(p126)

After a European tour for the second album, County stopped in West Berlin for a fortnight before returning to London for a nose job. However she ran into the wrong immigration official, was detained overnight and returned to West Berlin.

There, she was introduced to Romy Haag and her club. She had her nose done by a doctor on the Kurfürstendamm, who had worked on several trans women. When County returned to England at the end of Summer 1978, press reports suggested that she had had the full sex change, but she tired of explaining and let people assume as they liked.


"It bothered people. There was a distinct cooling of attitude, even among the fans; underneath that liberal attitude exterior, a lot of punk fans were really straight-down-the-line conservatives, and they hated the fact that I was actually living out the implications of my songs. Some of them even said 'You've betrayed your sex'." (p131)

Late in the year the band went to a farm in Wales to write the third album. Things Your Mother Never Told You came out to good reviews and was followed by a gruelling tour of Europe.

In Late summer 1979, Wayne fled to New York and decided that it was time to change her name to Jayne. She founded a new band, played CBGBs and toured. She also toned down her appearance.

Early 1980 Jayne returned to West Berlin to be in a play with Romy Haag. The play was a success, but Jayne and Romy fell out and remained so for many years. Jayne lived with PJ from San Francisco who had been in the Angels of Light before moving to West Berlin. However PJ decided not to continue as a woman and after being sacked by Romy returned to living as a male, and then her Turkish boyfriend did not want her any more.


"It was during my time in Berlin that I came closest to the idea of having a full sex change; it certainly would have been easy enough to arrange, and it's what everyone expected me to do. … The only reason that I can see for having the full change is so that you can move to a different town and marry a man and live completely as a woman, without anyone ever knowing what you are. But I don't think I could do that. Let's face it, if people know you're a sex change you'll never be accepted as a woman. … I'm happy in between the sexes; I'm comfortable and I actually like the idea. … I certainly wouldn't be happy with idea of being a man, and I don't consider myself a man, but I'm not going to try and convince myself that I'm really a woman." (p138-9)

Jayne was friends with Zazie de Paris (Solange Dymenzstein). She starred in Rock & Roll Peepshow. She also did a St Patricks Day concert at a US Army Base.

Jayne was introduced to the Latvian-born director Rosa von Praunheim and was cast in the film Stadt der Verlorenen Seele (City of Lost Souls) 1982 with Angie Stardust and Tara O'Hara.

In 1983, Leee arranged a gig in New York, and Jayne put on Rock & Roll Peepshow at the Pyramid, which led to the show Les Girls with Holly Woodlawn and Alexis del Lago, and International Chrysis.

Then Jayne returned to Germany for the City of Lost Souls tour, which was followed bt time in London where she was booked at the Fridge in Brixton, and she encountered Alan/Lanah Pelley during his transsexual phase.

She stayed in England until 1987. She recorded a couple of albums but they were not promoted.

On return to New York, Jayne took up with drag performer Constance Cooper, who introduced her to Sally's Hideaway off Times Square.

Jayne had not been home for 20 years. She phoned her mother and proposed a visit. She got a gig at Atlanta's Club Rio and attempted to find those she knew from the 1960s, but could find only Diamond Lil. She was introduced to the rising stars RuPaul and Deandra Peak.

To visit her parents she really dressed down. She ended up staying the summer.


"However much I may be Jayne County, my old personality, Wayne, is still there; it never goes away. … Jayne County is the one who's out there hustling and trying to do something with her career. But when I get home alone I can't wait to get the wig and make-up off, to put on an old t-shirt and my reading glasses and read my religious books or my history books or a horror novel, to eat cookies and drink tea." (p164-5)

Afterwards Jayne did a gig in Tel Aviv, and then returned to London for another four years. She became a regular at the Apollo Club in Wardour Street, where she met met old-time transvestites such as Francis Bacon, the painter.

She returned to New York at the end of 1992, and was in the Wigstock film, 1995. Her autobiography Man Enough to be a Woman came out the same year.

In 2014 Jayne was banned from Facebook for using the word 'tranny' a word that she has been using for 40 years. She spoke back in an article in Queerty:


"Tranny is not a slur word and I resent anyone trying to make it one. It’s the intent behind the word, rather than the word itself, that can be sometimes offensive. It may be a silly word, but it’s certainly not worthy enough to be banned. That is censorship, pure and simple and no better than right-wing Christian extremists or any other tyrants, who want to force their narrow-minded, conservative opinions on others."