Spencer Teal was born in Canada, and then moved to North Dakota with his parents. He studied with a modern ballet group, and after college taught for a year in an art institute in North Dakota. 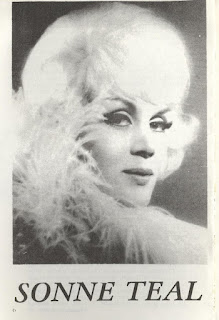 As Sonne, he then joined a female impersonation revue, before performing at the 82 Club in New York. There he was seen by the choreographer of Le Carrousel, who was appearing in New York, and was offered a contract to work in Paris with Bambi. This lead to two years at the Casino de Paris, and a European tour.

He was in one film, La Poupée (The Doll), 1962, in which he plays the dictator’s wife and also her robot double. Apparently the director, Jacques Baratier, did not realize Sonne's off-stage gender before casting.

He died on a Japanese tour, with four other members of L

e Carrousel, in a freak accident flying over Mount Fujiyama.

Avery Willard tells us that Jacques Baratier was parviscient, that he did not twig that Teal was a female impersonator. However look at page 178-9 (here) of Film Theory, 2004, by Philip Simpson, Andrew Utteron & Karen Sheperdson, where Parker Tyler in an essay "Mother Superior of the Faggots and some rival queens" says:


In two French films. La Poupée and Sweet and Low, the basic homosexual is seen in quite disjunct charades. The former, a heavy-fantasy farce, had a well-known female impersonator, Sonne Teal, playing a professional who doubles as a theatrical producer's wife. Here was someone with a high degree of impersonator talent who yet left his male identity tangibly visible. It seems as if the plot's inner dimension (the impersonation of a real female by a professional impersonator bent on deception) meant to ratify a oblique tour de force the overt tour de force of the nightclub act. Mr Teal had enough sheer acting talent to make his complicated film stint amusing. Bear in mind that there is no serious effort in such cases to make the sex impersonation more than a meaningful, though perhaps ambiguous illusion.