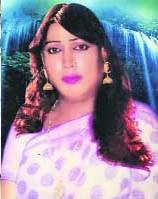 Daya was born and has always lived in Dasna, Ghaziabad, Uttar Pradesh. She lived with other kinnars in a shared bungalow.

Although illiterate, in 2004, 2009 and 2014 Daya Rani contested the Ghaziabad Lok Sabha constituency in the General Election as an independent. In 2007 she ran for the Uttar Pradesh assembly. She stressed her gender identity:

However in 2014 the District Magistrate cancelled her nomination.

On the morning of 4 July 2015, Daya Rani was found dead in her room. She had been shot through a hole cut in the wire mesh over her window, and the gun fired as a train passed so as not to be heard.

Two days later the police arrested Waris and one other at the Ghaziabad bus stand, and found a country-made pistol and a knife. The accused had the idea that by murdering Rani, they could obtain her wealth, said to be 1,00,00,000 rupees or more. In addition, Waris, was married to Rani's niece, Geeta, against Rani's wishes. Later Rani had provided accommodation for Geeta and her child, but not for Waris.