In 1936 the young Margaret Johnson was an ambulance driver in the Spanish Civil War, and then she was in Prague in 1938 after the German invasion, where she helped Jews and other refugees escape into Poland. During WWII she was in the Women’s Auxiliary Air Force, and was sent to France to work with the Resistance – however she was caught and tortured by the Gestapo until a bribe got her out.

From September 1941 she was Assistant Labour Manager at the Royal Ordinance Factory at Swynnerton south of Newcastle-under-Lyme, and took her husband’s name when she married Mr Branch – but the marriage did not last. From 1943 she was a journalist for a while in London. 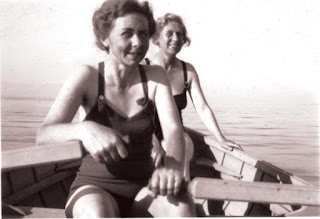 In 1945 she went to West Germany working for the UN’s Relief and Rehabilitation Administration  (UNRRA), where she met Camilla Ruegg who became her life partner. Margaret went to Switzerland to study with the renowned psychiatrist Carl Jung. January- March 1955 she attended a course in Mental Hygiene at Dalhousie Medical School in New Brunswick.

By the 1960s she was a psychiatric social worker at Guy’s Hospital in London. She worked in children’s therapy and she and Ruegg founded the National Association of Gifted Children, and worked also on the BBC TV 'Lifeline' & 'Face-to-Face', Series.

By the late 1960s she was working at Guys liaising with trans and intersex people – of whom the best known is Peter Sterling. She gave a paper on her work at the First International Symposium on Gender Identity, London, 25-27 July 1969, and again at the Second at Elsinore, 12-14 September 1971.

Later she worked as a counsellor for all LGBT individuals , and appointments co-ordinator at the Albany Trust, and worked on the Gay Bereavement Project helpline in 1980.

Ed Knox, a relative of Camilla Ruegg, has been working on a much anticipated biography for some years now.