Jane Henriette Rachel Magre was raised in Toulouse. Her father, a prosperous merchant, died when she was young. She was educated at the Couvent de l’Assomption d’Auteuil in Paris from 1862 to 1870 where she was well instructed in Greek and Latin and modern languages.

In 1870 she married Marcel Dieulafoy (1844-1920), a well-travelled railway engineer also from Toulouse. With the outbreak of war against Prussia later that year, Marcel volunteered. Madame Dieulafoy had her hair cut short and obtained permission from the War Department to wear a man’s uniform and to accompany him. She endured together the harsh winter and the subsequent surrender. 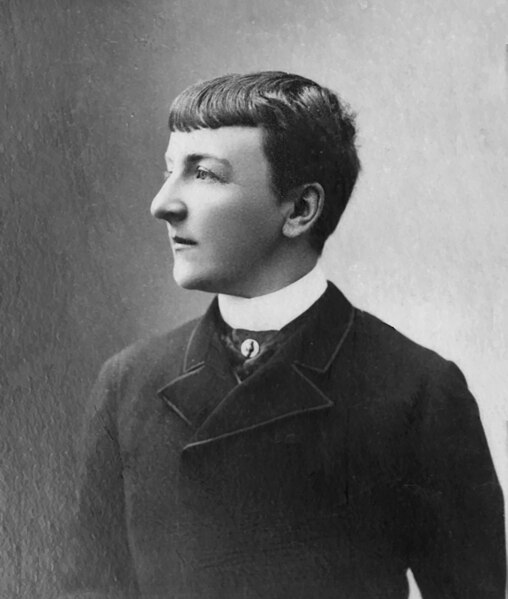 In 1881 after a year of planning, Marcel went to Persia as an archeologist, and Jane went as his ‘collaborateur’ (masculine). They sailed via Constantinople to Poti in Georgia. Then after a 10-day trek by horseback across the Caucasus in severe snow conditions, they travelled six thousand kilometres photographing and documenting monuments, bridges, dikes and mosques.

They did not adopt native dress and as two apparent European men had several occasions when they needed their weapons. Jane developed a lice problem and had to shave her head. The Shah received them in Tehran, and was reluctant to believe that Jane was a woman.

Their goal was the ancient site of Susa. They finally reached it, but because of torrential rains and fever, they were able to stay only a few days.

Back in Paris Jane published an account of their travels in Le Tour du Monde, and they prepared to return. In February 1885 they, accompanied by an engineer and a naturalist, returned by sea followed by a caravan to Susa. They employed up to 300 local men and did a systematic exploration of the site. Their major find was the Lion Freize which you can still visit at the Louvre in Paris. They left via Turkey with 54 wooden boxes filled to the brim.

A third trip yielded the Frieze of Archers and the Place of Darius. They returned to Marseilles by sea with 400 creates of archeological material.

During each of the visits to Susa, Dieulafoy had worn only men’s clothing, and a photograph of her on site looks like that of a man, in both clothing and gait. On return to Paris in 1886 she forsook women’s clothing completely and obtained a permission de travestissement from the police. She wore up-to-date men’s fashions.

At the inauguration later that year of the Dieulafoy rooms in the Louvre, Jane was awarded the cross of the Légion D’Honneur. The politics surrounding the Dieulafoy dig changed in both France and Persia, and they were never again to return.

Jane wrote her first novel, Parysatis, set in ancient Susa. It later became an opera with music by Camille Saint-Saëns. She later wrote three novels set in the French Revolution.

In 1904 Dieulafoy and several other women founded the Prix Femina as they were all denied the existing literary awards because of their gender.

Jane and Marcel turned their attention to Spain and Portugal and photographing and documenting old buildings and churches, published several books.

In 1914 she militated for women in the military auxiliary services, a proposal that was met by embarrassment and silence.

The term ‘transvestite’ is appropriate here, but Dieulafoy is quite different from how the term is used in the 20th century.
Time: 02:12