Starr was born in Cuba and raised in Miami, where she grew up as an effeminate boy frequently harassed at school. At 15 she joined a gay-and-lesbian youth group, and became confident enough to win a school contest with a drag performance. 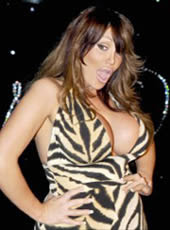 In 2008 she and Buck were sculpted life-size by London Artist Marc Quin.

www.transexualstarr.com and her Wikipedia page say that Allanah (under the name Damian Divine) performed at Madonna's 32nd birthday party.  If you check Ciccone's book, she actually gets a one-line mention.  It says that a bunch of drag queens were invited to attend, and also a bunch of basketball players.  The players pushed all the drag queens into the swimming pool.