David and Thelma Walter were roommates at the University of California in 1940.

By 1947 David had transitioned as much as was possible at that time, and had a small farm outside Sonoma, California where he raised chickens, rabbits and Chinchillas. Thelma was a teacher at Sonoma Valley Union High School. They were married in June 1947 in San Francisco.


"We couldn't figure out any other way to live. Under our code, we decided that marriage was the only course. We considered living together without being married very improper." 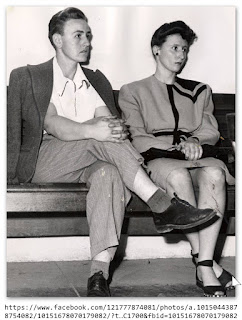 Later that year the FBI visited to find out why David had not registered for the draft. They discovered that David was legally female, and both were charged under an 1872 law against impersonating another person and making false affidavits to marry.

Walter lost her teaching job after their story was in the local newspaper. A San Francisco psychologist interviewed the couple, and recommended that all charges against Mr. and Mrs. David Warren be dropped because no laws had been broken.

Their marriage license was never voided by the court and is still on file at the Sonoma County Courthouse.