Tony Morrison grew up in Cincinnati, where one of his friends was Robin Price, who also became a professional female impersonator. As a teenager Tony made a living as a female stripper. He joined the Jewel Box Revue as Tony Sinclair when it played in Cincinnati in the early 1950s, and toured with them for over a year. He then played at the Jewel Box Theater in Kansas City.

He arrived in Oklahoma in the late 1950s, where it is rumored that he lived and worked as a woman before becoming known as a female impersonator. Tony put on the Les Girls Revue at the Inferno club with female dancers. He quickly made a reputation for wardrobe design and sewing, and made specialized costumes for strippers and showgirls including Dallas legend Candy Barr. He also borrowed outfits from Payton-Marcus department store where he worked during the day.  In his own performances he was often taken as a woman until he took off his wig at the end of the act. He was also still working as a female stripper.

Tony’s male persona was one of the few out gay men in Oklahoma City in the 1960s. He never hid his sexual orientation nor his love of drag. He was active in the gay community, and was an early role model. 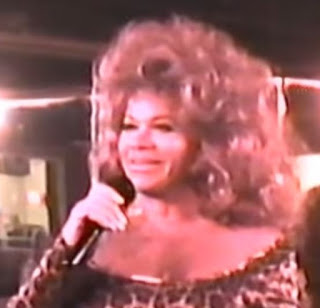 Les Girls Revue toured Oklahoma and Texas, and was considered locally as a rival to the Jewel Box Revue. Once they were doing a sold-out show in Fort Worth during a local election, and the Texas Rangers, the Texas Liquor Board etc raided and arrested the entire cast.

In 1969 as advertising for a new straight nightclub, Tony was photographed reclining on a chair under the theme “unusual floor shows”. The staff at the Daily Oklahoman didn’t get the joke and ran the advertisement in the women’s section.

*Not Toni Morrison the novelist. Not the footballer, nor the spokesman for Tanqueray gin.