In 1980 Paul Walker resigned from the UTMB and moved to San Francisco. He lived on Castro Street, and had an office at 1952 Union Street. He was now openly gay, and specialized in helping trans patients. His official diagnosis for trans patients was usually "anxiety" to keep it private and confidential until the patient began the real life test. 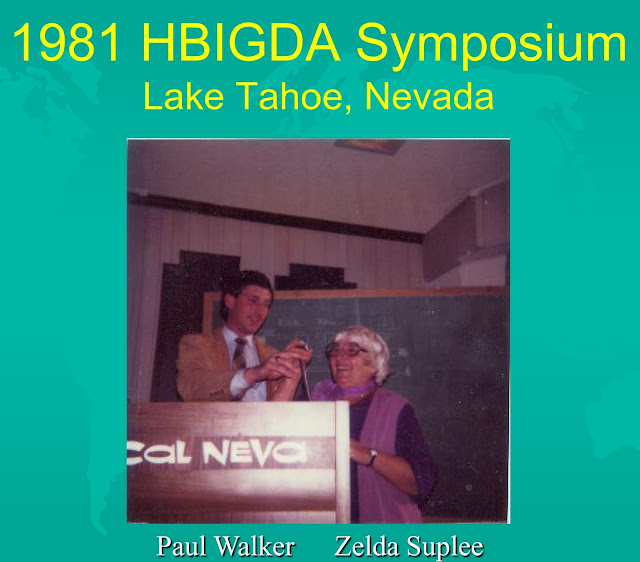 The Janus Information Facility (JIF) moved with him. One of the volunteers at JIF was Lou Sullivan - JIF’s first and only FTM member who did peer counselling and answered correspondence. There were very few out androphilic trans men at that time, and to Walker Sullivan could talk about his sexuality. They would also flirt with each other. Sullivan’s 1980 guidebook, Information for the female to male cross dresser and transsexual, and its later editions were distributed by JIF. Walker was added to the Board of Directors for the Stanford Gender Dysphoria Program, where he learned that Norman Fisk had once made a public announcement that he would never approve a gay FTM for surgery.

The sex offender treatment program in Galveston had been privatized after Walker left. The University of Texas Medical Branch continued its gender program - 121 trans women were operated on 1972-1992, and it is still in operation. The clinic embraced the HBIGDA Standards of Care when they were published in 1979, although they rejected candidates whom they regarded as ‘homosexual’ despite the SoC saying such are not to be excluded. It published a summary of its work in 1995.

In 1981 Walt Heyer, 40, a married transvestite on the down low and a regular at the Roadrunner Bar in San Francisco’s Tenderloin, gained Walker's name from the grapevine and came as a patient. Walker recognized Heyer, having seen his female persona in the Roadrunner.  According to Heyer’s account, at the end of the first session Walker diagnosed gender dysphoria, and in the third session gave Heyer a letter recommending trans surgery. This despite the Walker co-authored Standards of Care which required two such letters and at least one year of cross-living before surgery. Heyer actually went to Trinidad, Colorado and saw Dr Biber, but chickened out. In 1983 Heyer again gained approval from Walker, and again went to Trinidad. This time she went through with it and became Laura Jensen.

Walker was interviewed for the 1985 HBO documentary What Sex Am I?. He mentioned that for some, “It is better to have a medical problem than a moral or psychological problem”.

Dr Walker was recommended by the syndicated newspaper agony aunts, Anne Landers and Abigail Van Buren, and that is how airline pilot Sarah came to him for counselling in the mid 1980s. She commented:

“I unfolded the grimy column, and he ruefully said that whenever she did that he was flooded with two or three thousand phone calls. Glad I had my dime handy early. Dr. Walker was indeed a recognized expert in the field of gender, but it still took three or four years for him to dismantle the straw man the military had done so much to create. When I first dragged myself across his threshold, I had never met anyone who had so much as contemplated gender reassignment, much less undergone it, and I was about as inclined to embrace the idea as nuclear waste. What I had imagined was some secret shrink voodoo that would excise this strange zit on my psyche, and restore me with a spasm of relief to the self I imagined myself to be. Instead, most of that lengthy therapy was spent slowly hammering down walls of guilt and shame. It’s remarkable how little attention was required to resolving the question of gender once that was done. I’m sure it’s always like that, and how I hope that some young teen reads these stories and has the sense to sidestep those twin distractions.”

In 1985 Sullivan asked Walker to help get him approved at Stanford, but he was rejected anyway. There were intimations that Walker would give a paper on gay FTMs at an HBIGDA convention but it never happened. Sullivan was disappointed in Walker’s reluctance to advocate on the issue.

“Walker still felt that the homophobia of his fellow gender professionals needed to be challenged, but claimed that what they needed was a “squeaky clean” test case—and that Lou would not do because of his sexual history. Lou argued that he had “felt and acted consistently as a gay man,” regardless of those with whom he had had relations. But Walker wanted a gold star fag, or an FTM who had only ever had sex with cisgender men, and preferably no vaginal sex.” (Brice: 144)

Surgeon Michael Brownstein had been operating on trans men since 1978. He knew nothing of any Standards of Care - he simply provided plastic surgery as requested by his patients. Sullivan contacted Brownstein in 1986 and was arranging for a metoidioplasty. Walker contacted Brownstein and “scared the hell out of him for not following protocol”. After that he required referrals for his trans patients. Walker finally came through for Sullivan by providing a referral.

In 1987 Walker returned from the 10th HBIGDA convention which was held in Amsterdam with the news that Louis Gooren had reported gay FTMs at Amsterdam support groups. This opened a door and other sexologists finally admitted that they too had met such mythical creatures.

Shortly after, Sullivan was diagnosed as HIV+. Walker responded compassionately and their friendship was renewed. Walker’s husband was likewise diagnosed the following year, and Walker himself shortly afterwards.

Laura Jensen, now five years after her transition, having accepted Jesus Christ and become involved with Alcoholics Anonymous (AA), increasingly felt that she had made a mistake. Jensen made an appointment with Walker. Walker responded to her claim of four years of sobriety, by admitting that he too was in a 12-step program, that he had been addicted to drugs and alcohol after a ski accident, and that he was HIV+. He later wrote to Jensen (who was returning to being Walt Heyer) that therapists should address alcohol and drug issues before moving on to gender issues. He assured Jensen/Heyer “that I share, as best I can, some of the pain that this mistake has caused you”. Heyer seized onto the word “mistake”, and has since built a career as a campaigner against transgender surgery.

Christopher Barrett was a patient at the Stanford Gender Identity Clinic in the late 1980s, and the co-ordinator, Judy van Maasdam, arranged an appointment with Walker

“who I found to be a very sincere, likable man. As it turned out, he was winding down his consultative services with that program, yet I was lucky enough to meet with him before he left.”

Both Paul Walker and Lou Sullivan died in 1991 of AIDS complications. The work of the Janus Information Facility was picked up by J2CP Information Services run by Jude Patton and Joanna Clark/Sister Mary Elizabeth.  1991 was also the year that Walt Heyer completed detransition.

*Not the actor nor any of the footballers, nor the judge.

In the 1950s and 1960sh, there was a much repeated typology of homosexual, transvestite, transsexual.  It seems to have been implicit that the three types were mutually exclusive.   In particular several GICs and surgeons rejected 'homosexuals'.    Stanley Biber as late as the 1970s was quoted:

"First, patients must pass at least two psychiatric evaluations ensuring that they're not homosexuals or transvestites or simply people seeking fame and fortune on the talk-show circuit. True transsexuals, Biber says, are not attracted to members of the same sex and do not become aroused by wearing clothes of the opposite sex. True transsexuals consciously and subconsciously believe they are members of the opposite sex, trapped in the wrong body. "

Above we mentioned that the  The University of Texas Medical Branch also rejected 'homosexuals'.

Against this, Benjamin's Scale, 1966, had specified that a High Intensity Transsexual, Type VI was a Kinsey 6 which means Androphilic, which means 'homosexual' while still pre-op.  Now in his actual chapter, "The Male Transssexual', Benjamin did not stick to his scale said, and allowed Kinsey 4 persons to be a Benjamin VI.

"This definition of transsexualism is herein interpreted not to exclude persons who meet the above criteria but who other­wise may, on the basis of their past behavioral histories, be conceptualized and classified as transvestites and/or effeminate male homosexuals or masculine female homosexuals."

I presume that the UTMB GIC  and Biber meant pre-op-androphilic trans women when it said that it rejected candidates whom they regarded as ‘homosexual’.

Lou Sullivan, contrarywise, was an androphilic trans man.   He had not been a lesbian.  There is a confused logic operating here.  In the sense that Sullivan was gay, so was Laura Jensen/Walt Heyer - who was gynephilic.  So - in this post-op sense - why were gay trans men rejected and gay trans women accepted?   I suggest it was the same reason that female couples but not male couples are found in heterosexual pornography.  And why most law codes in decades past criminalised gay men but not gay women.   Trans women who have a male lover before transition are 'homosexual', and trans men who have a male lover after transition are both considered 'homosexual', and both are rejected.   Trans women who have a wife before and a girlfriend after are somehow not regarded as 'homosexual'.   Trans men who transition and get a girlfriend are also not 'homosexual' - but doing what the doctors expect them to do.

No explanation has been offered for why Walker abandoned his own SoC for Heyer, other than that he had seen Heyer in a queer bar.  It was a standard complaint of trans women who had been living as female for - in some cases - multiple years, that the clock on the "Real Life Test" did not start until they were registered at a GIC.   In such cases it was reasonable to not require a further "Real Life Test".   But that did not apply at all to Heyer.   Oscillation, especially if done on the down low does not apply.

None of the sources that I read tells whether Heyer arrived for the appointment with Walker in female clothing.   I suspect not.  In which case Walker's diagnosis is all the more strange. 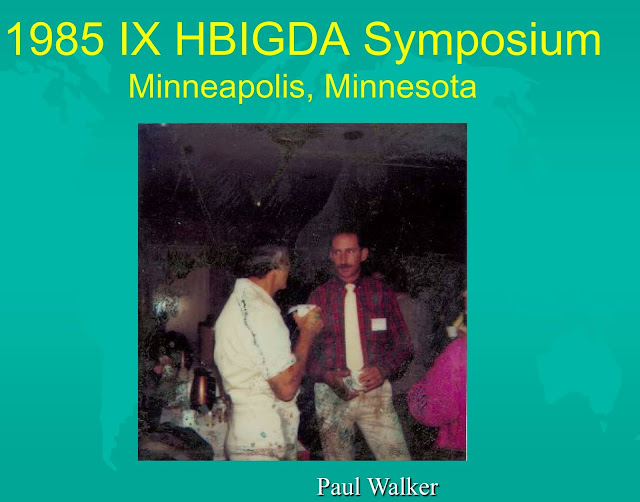