Tammy was born with ambiguous genitals, and her parents went with female. This went well until Tammy’s puberty when as Youngson & Schott put it, her “ equipment soon grew to respectable dimensions”. The embarrassed parents quickly switched the child to male clothing. The father, who was a doctor, was especially disconcerted and embarrassed; Tammy hated the change and knew it was all wrong. The father refused to talk to Tammy on the subject and considered his child’s objections to be unreasonable.

Making the best of the situation, Tammy got a good degree in electronics and moved to London with a job in computer mainframe maintenance. She was still Tammy; Tammy was still female inside, and dressed appropriately at evenings and weekends. This led to homophobic abuse from her landlord, and after a co-worker recognised her, a warning at work from the boss.

Tammy’s doctor was skeptical and unsympathetic. However she persevered and was taken on at a gender identity clinic, probably that at Charing Cross Hospital. She was subjected to the usual evaluations and delay tactics, but was finally approved and put on female hormones.

As she dressed female full-time, she lost her job, moved to cheaper lodgings and lived on the dole. After completion surgery she still had problems finding work, but did find work developing CD-ROM disc drives, where she was obviously competent and was promoted.

Her mother embraced her new daughter, but her doctor father continued to be disgusted by her development. 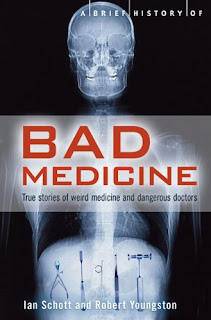 Medical Blunders and Bad Medicine are the same book issued under different titles. Robert Youngson gained an extra ‘t’ in his surname for the latter. Both authors were doctors. That said, their research into transsexuality is amazingly deficient. The books jump from topic to topic giving an example of inadequate or bad doctoring. For most of the episodes I can only accept what they say.


However the section labelled ‘Sex Change’ contains only this one example. Tammy (presumably a pseudonym) is obviously intersex, and is not best described as a transsexual although she had to go through the usual transsexual conversion. It is most likely that she had the condition popularly referred to as ‘Penis-at-Twelve’, what doctors properly call 5-alpha Reductase Deficiency (5-ARD). 5-Alpha Reductase is an enzyme that converts testosterone to dihydrotestosterone. A baby deficient in this enzyme develops as a girl until puberty, and indeed may have a pseudovaginal perineoscrotal hypospadias which would be taken as a vagina. At puberty different and stronger forms of testosterone kick in and cause virilization. This condition is due to a defect on an autosome (not a sex chromosome) and requires two mutated genes, one from each parent. I have no idea why Youngson and Schott do not explain this. Nor why they do not name the Charing Cross GIC.

The authors open with: “Tammy ... was undoubtedly a man. A test had shown that every cell in his body contained an X chromosome and a Y chromosome”. So they have presumably not read the first chapter of Benjamin’s The Transsexual Phenomenon.

Later they write: “As a result of his parents’ mistake, Tammy was a transsexual”. They do not tell us when Tammy was born. Assuming that she completed transition in her middle to late 20s, and we know that CD-ROMs came out in the early 1990s, she would have been born in the early 1960s, possibly the late 1950s. Knowledge of 5-alpha Reductase Deficiency was very rare around 1960, and thus it is totally unfair to accuse the parents of making a mistake at that time. However if we assume that Tammy arrived at puberty in the early 1970s, that is the same time as endocrinologist Julianne Imperato-McGinley was investigating the high frequency of 5-alpha Reductase Deficiency children in a village in the Dominican Republic and awareness of the condition was expanding. A particularly well-informed local doctor might have heard of it at that time.

“As a result of his parents’ mistake, Tammy was a transsexual”. Many books have been written on nature vs nurture, it is congenital or caused by rearing? In the 1960s it was fashionable to blame the parents, especially the mother, for all sorts of things. Two doctors writing in the mid-1990s should know better than to blame the parents like this.

The authors do not say what would have constituted good doctoring in this case. We now know that some 5-alpha Reductase Deficiency children choose to grow up as men and some as women. Tammy should have been listened to and counselled at puberty. Given that she felt that she was female, she should then have been offered female hormones to maintain her original sex - such therapy is offered in the village in the Dominican Republic.

Tammy was not transsexual, not in the sense of an apparent boy who grows up to be a woman. She was a girl whose girlhood was disrupted and only regained at great effort.