A Miscellany of Typologies

Of the making of typologies there is no end.

To some extent they are needed in that trans persons are and can be very different. Those who attempt to abolish our variation by banning the obvious words like Traassexual and Tranvestite deform us by making everybody a vanilla Transgender.

Howver none of the Typologies work comprehensively. Whichever one you prefer, there are many trans persons who do not fit in any of the boxes.

Unfortunately, for the last couple of decades one particular typology that of HSTS/Autogynephilia as propouned by Kurt Freund/Ray Blanchard/Michael Bailey/Anne Lawrence/Kay Brown/Rod Fleming has dominated the discussion. There was a basic insight there in that early transitioners are indeed different from those who are first husband and fathers before transition - but their confaltion of other variables with the basic dichotomy increases the number of those of us who do not fit into the schema.

The typologies give us words to describe ourselves, and even to organise. However they should not be taken dogmatically.

You will immediately notice that almost all of these typologies apply to trans women, and extremely few to trans men. 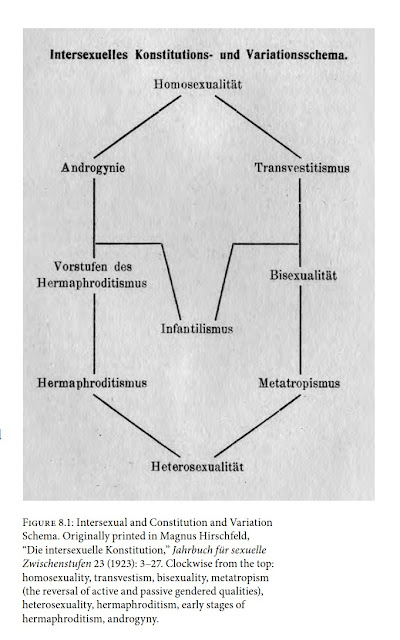 2 Homosexual. Part of the perversion.

3 Heterosexual. Constitutes a part of a contrary sexual state.

4 Pronounced heterosexual desire to imitate and enter into the feelings of the opposite sex.

5 Pseudo-transvestism for reasons of employment.

three types of ‘males’ who may share ‘the desire to wear feminine attire’:

A: The Immature type


Mr A, 25 and in catering, subject all his life to over-doting parents, no associates of his own age and sheltered from the outside world. No sexual experience and no opportunities to cross dress.

B: The Aesthetic type


A sensitivity of feeling, a desire of everything that is fine and clean, a love of music and the arts. A disassociation of all fine things from masculinity. A feeling that one cannot express finer emotions and remain masculine. A man's life is shallow and superficial while femininity represents purity, cleanliness, finesse, charm and gracefulness, gentleness and beauty. These transsexualists are intelligent and well-educated, and are successful in passing as male. They can be talked out of transition if the illogicality of associating aesthetic characteristics with womanhood is forcefully brought home. Mr B, 34, engineer, an only child raised by his father to avoid aesthetic and beautiful things. He spent good money so that his female clothes were just right. After a period on female hormones, he reverted to male after realizing that his female state would be less than perfect.


Identify with their mother, and are antagonistic to their father. Mr C, 44, chemical processing executive. His desire to cross-dress is repressed by his fear of ridicule, and when he does, he quickly burns the items afterwards.


Unlike the above, this type has friends, and does not feel guilty about cross-dressing, and often will reach a stage of being a man only for work. Many work as female impersonators, and transition earlier. Mr D, 42, engineer, served in the forces, taken for a girl as a child and overcompensated by being good at rugby and cricket. Attracted to men but rejects homosexuality. Has been to many doctors, and has started living as female, though unable to obtain surgery.


Turtle sees this as a variation on the Homosexual type. They are selfish and cowardly, and desire to be female in that things must be easier for females. They want to be pampered and looked after without having to work hard. They enjoy the pleasure of fooling people by their appearance, and are exhibitionists. Often they will abandon wife and children to live full-time as female, and have fantasies about becoming prostitutes. Mr E, 56, married with several children, has lived on and off as a woman for much of his life, and has obtained a female National Insurance card. Has made no effort to seek treatment. Has been arrested for theft.

no letter The Glandular type

Glandular, that is endocrinal imbalances, result in a man in his twenties who does not shave, or a woman with a muscular physique and hirsutism. Of those so affected, only few become transsexualists. However for those few, the adoption of a cross-sex role comes easily. Those born boys often take up work as a female impersonator, but move on to a sex change, and afterwards desire marriage. Those who manage to obtain female hormones early avoid the male secondary sexual characteristics, and have less past to leave behind them. Turtle, however, cautions: "Nevertheless, it must be remembered that however much justification these individuals might appear to have they are no less biologically of the sex they were born, and can still only be called transsexualists. We are not therefore speaking here of someone who is intersexual."


Turtle admits that there should be a corresponding typology for female-born transsexualists, "Nevertheless, all cases known to the writer had intimate female partners, suggesting that most were probably homosexually oriented." There was no significant loneliness or need for secrecy. Miss F, 25, an only child, wanted to be a boy from childhood. Since the age of 18 has sought help from doctors, but with no success. Has had a female companion for many years.


In true intersexuality "sexual ambiguity is caused by a conflict of the biological factors affecting development, and, in contrast to transsexualists who often prove the normality of their sexual function, intersexes are often both physically and sexually immature and may indeed be sterile". However "intersexes may continue through life quite happy in their sex of rearing, regardless of their 'true' sex". Miss G, 37, realised from early years that her interests and feelings were those of a girl. "In spite of her inner feelings there was never any question of wanting to dress up or resort to transvestism, and it was only when she was eventually obliged to see a sexologist that her physical intersexual state was revealed."

It followed Kinsey in that a transvestite may or may not be homosexual, and rejected the common attitude in psychoanalysis that (1) was the main form.

Divided all transvestites into three groups:

Benjamin had arrived at this typology after observing over 200 patients, of whom more than half he diagnosed as transsexuals.

In reaction to Benjamin.

1 Primary - functionally asexual and who progresses resolutely toward a surgical resolution without significant deviation toward either homosexuality or heterosexuality, no evidence of effeminacy in childhood.

2a Secondary, homosexual - effeminate from earliest childhood, preferred girls as playmates, avoided boyish pursuits and were "mother's helpers." Crossdressing began in childhood, initially for narcissistic satisfaction, but later at puberty to attract male sexual partners. Cross-gender fantasies were frequently tied to identification with movie actresses and drag queens. The authors note that the homosexual cross-dresser wants to be noticed and to this end often wears flamboyant and colorful clothing and engages in theatrical endeavors.

2b Secondary, transvestic - appropriately masculine, and occasionally exceedingly hyper-aggressive and hyper-competitive. They neither played with girls nor engaged in female pursuits. They fantasized about being girls when cross-dressed, but valued their assertiveness and maleness.

This typology was in contradistinction to Stoller’s writings where the androphilic early transitioner was regarded as primary.

The stable options:
The changeable/creative options:

A rewrite of Blanchard’s typology to be more polite

G1. A high degree of cross-sexed gender identity. The cross-gender expression of identity of these individuals appears very difficult or impossible for them to conceal. They transition naturally, without anxiety and with relatively little difficulty

G2. A lifelong history of rejecting the dress conventions of their assigned gender along with conventional toys and activities. … these individuals typically take full advantage of the social permissiveness since the late 1960s and the gay and lesbian movements to wear gender-neutral clothing. They transition without anxiety.

G3. Individuals who look and act unambiguously as society expects them to but privately identity as the opposite gender. For these female-identified males and male-identified female the result is a more complicated and insidious sex/gender discontinuity. From earliest childhood these individuals typically suffer increasingly painful and chronic gender dysphoria. They tend to live secretive lives, often making incrementally stronger attempts to convince themselves and others that they are the gender they were assigned at birth.

"If there is any one lesson to be learned from studying this field it is that the individual is individual. People define themselves and the self-definition must always takes priority over the received wisdom. I have met self-defined draq queens whom others would describe as TV either because they enjoy 'passing'; or because they 'dress' so often that it could be seen as a compulsion; or because they wear lingerie, either to turn men on or to make themselves feel sensuous. I have met drag performers who have grown to dislike drag, and men who insist on being called 'cross-dressers' because they dislike what the word 'drag' stands for, and men who wear part-drag in order to create confusion and doubt amongst others, but who would never wear full drag because that would defeat their object. I know self-defined TVs who are gay or bisexual or oscillating, some of them having learned to cross this sexuality barrier through their cross-dressing. I have met TVs who dress like drag queens and drag queens who dress like TVs, and TVs whose cross-dressing has encouraged them to question their 'male role', which in turn has made them examine their idea of 'femininity'. And perhaps most important of all, I have learned how marshy a terrain is the middle ground between our earlier clear-cut distinction between transvestites and transexuals."

a 5-part typology for heterosexual transvestites:

a 4-part typology for homosexual transvestites:

(3) transgression – transsexualism and the disruption of sex and gender. 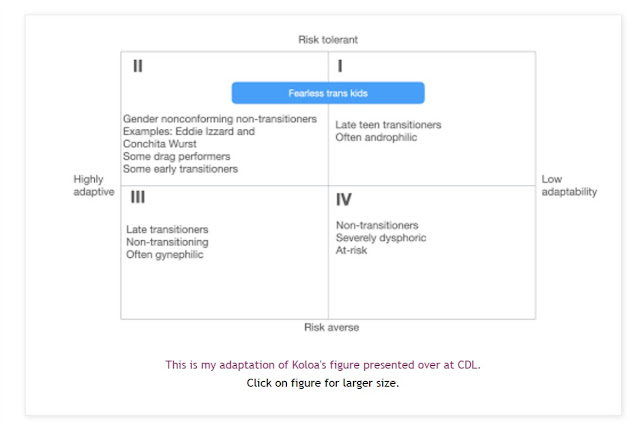 I: Trans Individuals with higher risk tolerance, yet low adaptability manifest dysphoria at a younger age, fail to adapt to their assigned gender, yet feel more free to transition before mid-life if not in their teens and early 20’s because they are socially risk tolerant.

II: Trans individuals with high social risk tolerance and high adaptability are the most visible and carefree in their gender variance. Examples are Drag performers or gender rebels like Eddie Izzard and Conchita Wurst.

III: Trans individuals with high adaptability yet low social risk tolerance find they can live long successful lives as their assigned gender and often never transition at all. They avoid expressing variance due to a low social risk intolerance. And if they do transition it is usually mid-life or later after a process that enhances their social risk tolerance. Many MtF in quadrant III are gynophillic which might contribute to adaptability to their assigned gender.

IV: Trans individuals with both low social risk tolerance and low adaptability experience the worst situation because they cannot find any comfort in their assigned gender. The inability to adapt and the fear of the social and material consequences gives them a life bereft of expression putting their mental health and very lives at risk. Individuals in this quadrant simply endure until they experience a mental collapse that leads to treatment, or loss of life. This crisis can come at any age.

Email ThisBlogThis!Share to TwitterShare to FacebookShare to Pinterest
Labels: typology