Walker was raised in Baltimore, did research in behavioural endocrinology with John Money at Johns Hopkins Psychohormonal Research Instititute from 1966, and graduated 1976 from the University of Rochester with a PhD in Social Psychology with a thesis on attitudes toward drug use and sexual behavior.

He then gained a teaching position at the University of Texas Medical Branch (UTMB) at Galveston where he started a sex offender treatment program using a combination of medication and psychotherapy. He also ran the Gender Clinic there which had been serving transsexuals since 1972, and was becoming one of the major Gender Identity Clinics in the US.

Reed Erickson closed the Erickson Educational Foundation (EEF) in 1977. Walker and Zelda Suplee, who had been Director of the EEF, then formed Janus Information Facility which carried on some of the work of EEF, and Zelda also moved to Galveston.

Most of the trans patients at UTMB were self-referred after they learned of the Gender Clinic by word of mouth or, from 1977, through information available from the Janus Information Service. The patients' physical and hormonal measurements were taken, and hormones were prescribed. The program ran 1976-80, and an account was published in 1986. The program evaluated and treated 60 male-to-female transsexuals (age 15 to 53 years, median 28 years) and 30 female-to-male transsexuals (20 to 55 years, median 34 years). Results were published in 1981 and 1986.

In 1977 Walker was the defense psychologist at Fort Rucker. Alabama, where a young female soldier was accused of homosexuality for marrying a transman, Kristian von Hoffburg. Walker testified that the wife was not at all homosexual, and described the marriage as ‘cognitive heterosexuality’.

When the Johns Hopkins Gender Identity Clinic was closed in 1979 based on the contentious study by Jon Meyer, Walker was quoted in the New York Times:

“If the study shows anything at all, it’s that careful screening before surgery is critical to the outcome. You have to be very careful about whom you operate on. Many applicants, certain that they want an operation, give a very convincing biography of a transsexual. They know exactly what to say. But if you put up any barriers to the surgery, they change their minds”. He pointed out that Meyer’s study examined patients just before their surgery but after they had completed the real‐life test. He added that “most of the changes had already taken place, so it's no surprise that he found no further improvement afterward”. (Brody)

In response to to Dr David Barlow of Brown University who claimed to have ‘cured’ three transsexuals through conditioning techniques to act and think more like others of their biological sex, and earlier had reported a transsexual “well on his way to surgery” who was changed by a faith healer through exorcism, Walker countered that “if you can change them, they weren't transsexuals in the first place. I cure people every week, sometimes just by telling them what the preoperative workup and surgery will involve.” (Brody)

Millionaire trans man Reed Erickson had sponsored and financed three symposia (London 1969, Elsinore 1971, Dubrovnik 1973) that brought together the professionals in transsexual treatment. There was a fourth - not sponsored by EEF - at Stanford University in 1975 (The Harry Benjamin 4th International Conference on Gender Identity) and a fifth in Norfolk, Virginia in 1977 - the year that EEF closed down. Some organization was required. At the sixth Symposium at San Diego in February 1979 the Harry Benjamin International Gender Dysphoria Association (HBIGDA) was formally approved with Walker to be the first president. HBIGDA was officially incorporated as a non-profit corporation in the State of Texas, by Walker and his colleagues Walter J Meyer III and Alice Webb.

It was realized that a Standards of Care was needed. Apparently Walker wrote most of the first draft himself, but then struck a committee which he chaired. The first edition of the Standards of Care for transgender clients was published in 1979. 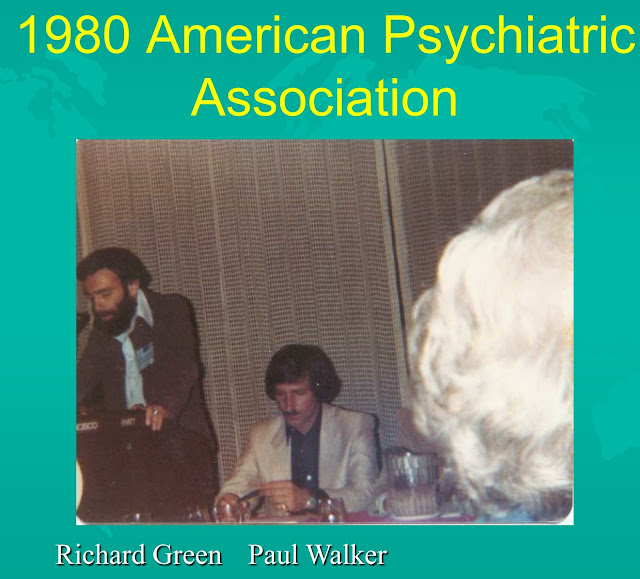 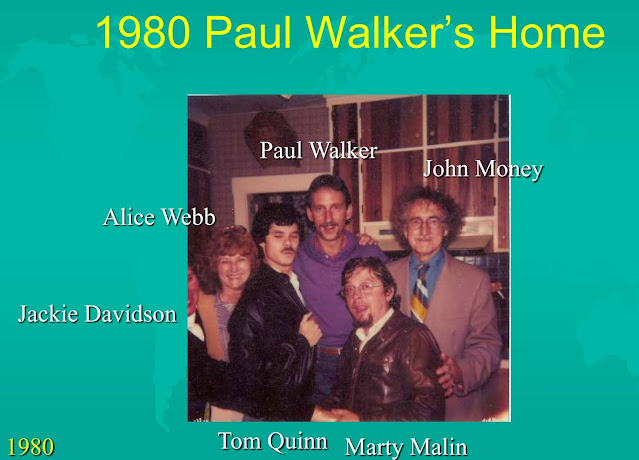 Writing by others about Paul Walker will be listed in Part II.