Roger Fray Greenwood Ormrod was educated at Shrewsbury School and at Queen's College, Oxford where he studied law. His father, a solicitor in Cumbria, also insisted that he study medicine like his grandfather. His medical studies were incomplete when he accepted a position in the law courts. In 1938 he married a woman magistrate and marriage guidance counsellor.

With the outbreak of war in 1939, he completed his medical qualifications, and served in the Royal Army Medical Corps 1942-5 in Normandy and north-west Europe. He was one of the first allied doctors into Belsen Concentration Camp. He finished the war in India, and was demobilized with the rank of major.

He then returned to legal practice and specialized in divorce and medical negligence. He became a Queen's Counsel in 1958. In 1961 he was appointed a judge in the Probate, Divorce and Admiralty division, and would contribute significantly to the development of no-fault divorce following the new Divorce Reform Act of 1969 which came into effect in 1971.

He was regarded as "the one judge who moved with the time more than any other … he was responsible, practically single handedly at times, for effecting the fundamental reforms which were set out in the Matrimonial Causes Act 1973 … was better suited to meeting the changing attitudes of Society in which a much more tolerant approach was being taken towards adultery, unmarried cohabiting couples, abortion and the divorced person" (Cazalet)". 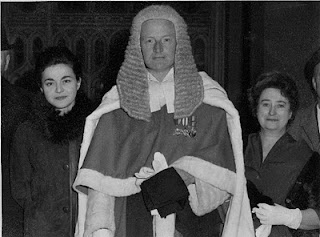 In 1962 he granted an Englishwoman a divorce from her Belgium husband and warned "When a woman marries a man of 31 who has never done a day's work in his life, she must accept that she is marrying a considerable problem". In 1967 he dismissed a husband's claim for maintenance as "ludicrous", although the wife had money and the husband had run the household. The same year he was the first British judge to order a blood test to establish paternity. Justice Ormrod was in the public eye as one of three judges who ruled in favour of a wife who said that sex once a week for her husband was enough. He had negative opinions about flamboyantly dressed women, and a dislike of fathers who gave up work to look after their children. He usually took the attitude that the wife must have the house and sufficient money after a divorce in that she would be raising the children.
++Also in 1967 he ruled in the divorce case of Talbot (otherwise Poyntz) v. Talbot that the husband was a woman, and granted an immediate  decree nisi of nullity. John Talbot did not contest the petition and was ordered to pay the costs.