Michael Scott Harmon was born in New Jersey and raised in Kentucky. His father was a full-blooded Navajo, but also an alcoholic who fell asleep with a lighted cigarette and died in the resulting apartment fire when Michael was 6 months old.

His mother remarried, to a Vietnam veteran who was straight with Michael about how boys are expected to behave, but also let him be himself. The stepfather died in a car accident when Michael was 13. Michael got drunk for the first time after the funeral.

He moved in with an alcoholic uncle, dropped out of school, got drunk and tried to be a man. At 17 he was arrested and the judge offered Juvenile Hall or military enlistment. In the US Navy he specialized in aviation electronics, and learned how to get away with being drunk.

At age 25 he married a Filipina, they had two sons, and he was reassigned to San Diego. After an arrest for drunkenness in 1992, he was sober for 11 years. He left the military in 1995 after 16 years service. He got divorced and returned to his Navajo roots. 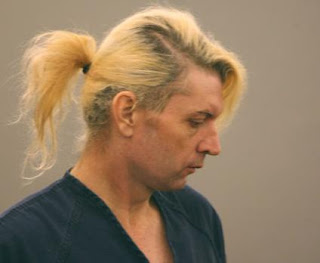 He changed his name to Raven Navajo. A few years after that he started dressing as female, and after a while going to drag clubs. His eldest son, at age 13, told Raven that she was happier as a woman, and should go full-time. To get work she started as an escort, first in Kentucky, and then in Las Vegas. She started female hormones. Then she took a job bar-tending in a trans-friendly nightclub. And started drinking again.

One night in 2007 she took up with fellow drinker Brenda Schmalfeldt and they continued at Raven’s apartment. They got into a quarrel and Raven hit her. She woke up to find Brenda dead. After two days of drinking to get the courage to kill herself, Raven put Brenda’s body in her car, and drove until she found a dumpster. A few days later Raven called the police to confess, but they never called back. When they finally came to see her, she confessed, but the body was no longer in the dumpster.

Raven attempted to plead guilty to first-degree murder, but drunkenness is a defense to premeditation, deliberation and malice. The jury found her guilty of second-degree, and she got 10 years to life - in a men’s prison as she has not had surgery.