He was born Jean Guida de Mortellaro in Paris to rich parents who lost their money in the crash of 1929. Still a child, he joined a touring revue and learned makeup, choreography etc, and was hired by the Ballets de Monte Carl 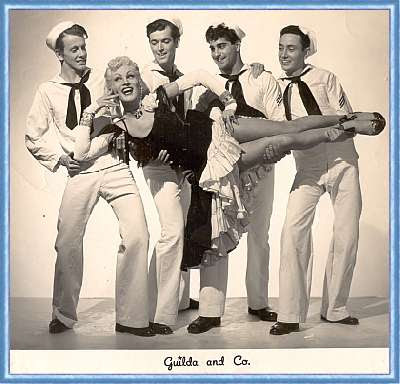 After the Second World War he became a travesti. He chose his drag name riffing the Rita Hayworth film Gilda, 1946, and the name of the bomb dropped at Bikini (also named for Rita). Guilda was soon starring in shows in Italy and north Africa. He starred at La Carrousel in Paris with April Ashley and others. He was mentored by the actor/singer star Mistinguett (Jeanne Bourgeois, 1875-1956) and was her stand-in, and toured with her in 1951 which took him to Montréal for the first time. He set up his own show and took it to North America.

When his US visa expired in 1955, he moved to Montréal, where he quickly was able to perform in cabaret and on television. His act was condemned by the Catholic Church, and cabaret culture was damaged by Mayor Drapeau’s moral crusade against them. However he went from success to success. Noteworthy was Guilda’s 1965 show at Place des Arts which also featured Barbette, and his playing the Chevalier D’Eon in the 1984 Québec television series, Les Grands Esprits.
Guilda twice married women, but was also sexually active with men, which occasioned comments in the Québec gossip papers. In 1979 he published his autobiography. 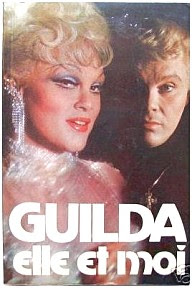 Guilda is also a painter, and the Archdiocese of Montréal commissioned him to paint a portrait of Pope John-Paul II.

For some reason Guilda is not in The Canadian Encyclopedia, nor is he mentioned in William Weintraub's City unique : Montreal days and nights in the 1940s and '50s.
Time: 12:33