In the Great War it was the convention that, among prisoners of war, officers wer 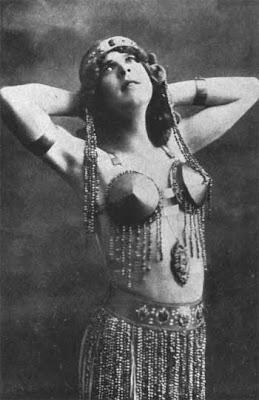 e separated from other ranks, and, unlike the other ranks, were not obliged to work. In fact they were paid a small wage (this was largely discontinued in Russian camps after the Revolution). This left them time and opportunity to put on theatricals. The German and Austrian officer prisoners in the Siberian camp of Achinsk were in a White-Russian controlled area and were not freed until the Soviet Government took over the area in 1920.

The officers produced no fewer than 88 different stage productions before liberation.

The star in Achinsk was Emmerich Laschitz (189? - ?), described as "Siberia's most famous female impersonator”, who played female leads in many of the productions, and especially in Oscar Wilde’s Salome (which would not be seen in England until 1931). Like other camp stars, he lived in drag off stage, and had a circle of admirers who washed and ironed his clothes. He received passionate love letters from other prisoners.