The Queer Encyclopedia of Music, Dance and Musical Theater - a review

This is a fun book, associated with the glbtq encyclopedia site, and I spent many hours looking up favourite musicians. You can tell that it is a US book from some of the entry names: John, Sir Elton; Tippett, Sir Michael; Ashton, Sir Frederick; etc. Although it doesn't bother with French or German honours. Most entries have a bibliography attached, although it is always a b 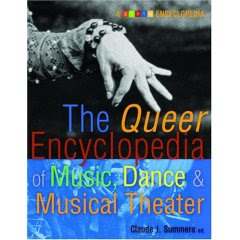 ibliography and never a mediography, that is only printed sources are listed, never documentary films, and only rarely online resources. There are no discographies as such, but an artist's major works are mentioned in the text.

This is a glbtq project, so we expect t=transy musicians. And indeed there are some. Frederick Ashton, ballets Trockadero de Monte Carlo, Gladys Bentley, Ray Bourbon, Boy George, Divine, Annie Hindle, Christine Jorgensen, Lindsay Kemp, Charles Pierce, RuPaul, Craig Russell, Ethyl Smith, Sylvester plus general articles on Drag shows, Male Impersonators and Female Impersonators, Kabuki and Takarazuka. Jayne County doesn't get an entry of her own, but is mentioned in the survey of Rock Music. Likewise Billy Tipton is in the survey on Jazz. This is fine as far as it goes, but ...

I quickly came up with a list of over 50 musicians, singers and dancers not in the Encyclopedia. Here are 15 of them:

Yes. It is easy to review almost any encyclopedia by finding entries that are missing. My turn will come when my own encyclopedia is published.
Time: 17:46