In the 6th edition of Drag Magazine, Online, the QLF presented a report of what it had achieved to that date.  Some of the wording is dated, particularly in using ‘men’ and ‘he’.  The struggle for basic rights shows how far we have come in 44 years, although remember that there are still many countries where it is illegal to dress as seems appropriate.

Queens Liberation Front … What is it? 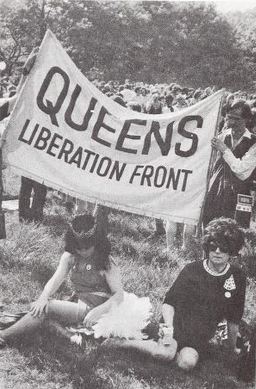 The broad objective of Queens Liberation Front is to gain the legal right for everyone who so desires to cross-dress regardless of their sexual orientation or desires. Queens Lib is not a membership organization but more of a foundation that is financed by drag balls, the publication of a magazine, DRAG and by speaking engagements on the phenomena of cross-dressing.  The only contributions accepted by  Queens is in the form of time and talent on the part of professional people. To keep in contact with people interested in cross-dressing QLF maintains an international mailing list of over 2,000 individuals and  organizations. Also, the voice of QLF or commonly Queens, DRAG magazine reaches 3,500 people across the country.

In its original prospectus Queens Liberation Front, then just known as Queens put forth two goals;


1. RIGHT TO CONGREGATE;
In New York the license for a drag ball or rather dance permit stated that men dressed in the female attire were not to be permitted on the premises of said dance.

2. RIGHT TO DRESS AS WE SEE FIT …………………………………
We feel that the wearing of a particular article of clothing doesn't make one a criminal.  We hope to get a ruling adopting the law presently used in the state of Hawaii. It has been interpreted to mean that one may wear the clothing of the opposite sex as long as he does not deceive others.  If one wears a button stating that one is a male it takes away all criminal aspects of cross-dressing.

On October 31st, 1970 the first anniversary of the organization Executive Director, Lee Brewster presented to the transvestite community QLF's first birthday present. . .the removal of the discriminatory clause on the dance permit.  Afterwards, during 1970-71, before going to court to set a legal precedent Queens Lib attorneys searched the law books for something else that might be used against the transvestite.  The only anti-drag statement the lawyers came up with was one on the Catering and Cabaret licenses which stated: "No homosexuals, Lesbians OR PERSONS PRETENDING TO BE were to be allowed on the premises of a licensed establishment”.  Afraid someone would use that clause against the cross-dresser as cause not to allow the tv access to public accommodations, Queens Liberation director, Lee Brewster and her attorneys made another call upon the Bureau of Consumer affairs.  Mrs. Susan First, legal representative for the department wanted to know which of the aforementioned groups Mr. Brewster and the lawyers represented.  Lee spoke up and said, "the persons pretending to be".  After about one hour of debating Queens Lib won again.  The clause was removed from the books. A second birthday gift was given to the TV community.

Queens Liberation has been represented on the campuses of the colleges in the North East area of the
U.S.  Some of the more recent engagements were at Rutgers University, New York University, Patterson State College, Mills College (an all girls school) and Newark State college at Union, N.J.  At all the speaking engagements QLF representatives appear in full female attire.  To date all the appearances have been very well received.  At Patterson State College, Mr. Brewster received such a reception she had to ask them to stop applauding.

In less than two years QLF has met exactly one half of its goals, which is more than most organizations can claim fame for.  Soon QLF will attack the antiquated loitering statutes used to harass the cross –dresser.  We hope to get the law interpreted to be similar to the Hawaiian
precedent.  THEN attack again on the grounds that it is unconstitutional and similar to Nazi Germany's tactics when they forced the German Jews to wear the STAR OF DAVID.

Queens Liberation is not a radical group of people. The only radical element is the fact that all want to be able to wear the clothing they choose without being classed as criminals.  They feel that it is their constitutional right and if demanding that right is radical, then they're radical!  The only time QLF gets involved in politics is when it concerns the cross-dresser or homosexual.
Time: 14:51