Part I: Life
Part II: Theory
Part III:  7 factors that are not causes


Bevan, trained in experimental and physiological psychology, has--sometimes as Thomas, sometimes as Dana--presented her findings on what she and only she calls TSTG. We will take five of her works (for full bibliography see Part 1). 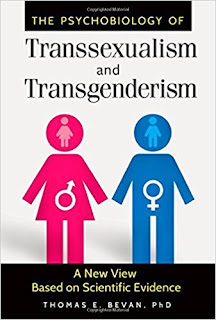 For brevity and clarity, I will use the numbers 1-5 for reference with a page number when applicable.


“Evidence from biopsychology indicates that the two causal factors for TSTG appear to be genetics and epigenetics, perhaps working together. We know genetics is involved because of twin and family studies and genetic markers on the DNA molecule for TSTG. We believe epigenetics may be involved because TSTG is implicated as being correlated with such phenomena as prenatal exposure to drugs. Prenatal exposure to toxic chemicals and maternal stress are also potential epigenetic mechanisms for TSTG. Genetic and epigenetic factors may work together to produce a gender predisposition that may be incongruent with cultural expectations of a person’s appropriate gender behavior category. We know that the prenatal testosterone theory of TSTG causation is not supported by the evidence. Several phenomena are known to involve both genetics and epigenetics, and TSTG is correlated with some of them. In particular, transsexuals and transgender people tend to be less right-handed. Genetic and epigenetic evidence as well as absence of evidence for other causal factors forms the basis for the two-factor theory of TSTG causation.”


“We know that TSTG is probably a biological phenomenon because of the historical and geographic spread of gender diversity and cultural accommodation. Information from genetics and epigenetics, as well as the appearance of TSTG in early childhood and other evidence, confirms that it is biological in nature” (2:241)


“Sex and gender do not mean the same thing”.

Both John Money and feminism sorted this out over 50 years ago. If Bevan is talking to LGBT persons she is belabouring the obvious. Money was a pioneer in using the term gender as opposed to sex. However Bevan cites  in the bibliography of (2) only a couple of papers where Money is a co-author. His major works, the Johns Hopkins clinic and the David Reimer case are not mentioned at all. Likewise there is no mention of feminism.

Far more of a problem in recent years has been the conflation of gender and gender identity. Bevan has no comment on this problem.


This is a short chapter in (2). In Antiquity she mentions only Queen Hatsheput and “eunuchs who were voluntarily castrated” - no mention of Gallae. In Contemporary Western TSTG, the only support group that she mentions is Virginia Prince and Tri-Ess, and she says

- as Tri-Ess forbids TS members, that is very badly phrased.

Like so many other authors, Bevan claims that Viscount Cornbury, Governor of New York was TSTG. Bevan wrote 15 years after Patricia Bonomi’s detailed biography that explained that Cornbury was not a transvestite, and gets his name wrong. Cornbury was Edward Hyde, but Bevan calls him Henry Hyde, the name of his father.

There is then a brief mention of Hijras, Kathoeys, waria, mahu, fa’afafine, Bakla, bugia, xanith and two-spirit. Apparently Bevan regards herself and these traditional third gender traditions as being pretty much the same. She certainly does not mention Vern Bullough’s hypothesis:


“there is no evidence in Western culture of what might be called a heterosexual transvestite consciousness before the twentieth century”.

See further in Part III when I discuss Autogynephilia.


“Heritability studies involving identical twins and families indicate significant loadings for a genetic factor in TSTG. If one identical twin is transsexual or transgender, then it is more likely the other twin will also be TSTG than the population frequencies.” (2:8)

In (4) Bevan puts numbers to this:


Other writers would mention the famous examples of trans women with an identical cis twin (Candis Cayne, Laverne Cox) – but Bevan is not that kind of writer. Bevan cites this ratio as the major reason for believing that TSTG is genetic. However having established this, it does not seem to be taking us anywhere.


“ TSTG is not a conscious lifestyle choice. Subconscious mechanisms make choices for us before there is any conscious awareness of them. Decisions regarding TSTG are influenced by biological gender predisposition, fear of exposure, and decisions about existential crises and other things, all of which are represented somewhere in the subconscious.” (2: 242).

The key word here is ‘conscious’. There is a section (2:182-4) titled The Illusion of Conscious Choice. This is the only section in Bevan’s books where she cites her mentor Julian Jaynes. (Note to Dana Bevan: it is inconsiderate to one’s readers to cite an entire 500 page book for a minor point. Please give a page or at least a chapter reference. Jaynes gives page numbers in citations.)

Bevan also cites the MRI scanning that shows the associated brain activity 10 seconds before conscious awareness of the decision. Neither Bevan, nor other writers who use this data, explain how to get from a momentary event like lifting an arm to events that take several years like doing a PhD or raising a child. Did Bevan spend 4 years at Princeton without ever making a conscious choice?

Remember the quote at the end of her autobiography (1):


“I had several good opportunities to choose correctly but I passed them up, choosing to fight another day.” Does Bevan make conscious choices or not.


Bevan goes with the Olyslager-Conway estimates. This is good. But her two-factor causality does not explain why there are so many more trans persons now than in previous decades and centuries.

The Olyslager-Conway estimates refer to transsexuals. Bevan goes with estimates of other trans persons being 1-2%. I think that this is too low. There is not any mention at all of the cross-dreamers, and beyond them the Dark Crossdreamers. And like practically every other writer, Bevan totally ignores Charlotte Bach and her proposal that attraction to being the other sex/gender is fundamental to being human – an attraction that one can either deny or asseverate.