From 1975 to 1998 at least 26 prostitutes in Spokane, Washington State – population 200,000 - were murdered by shooting, apparently by a trick who had sex with them first. Their bodies were dumped in rural locations.

Later in 1988 Perry was arrested by Federal Agents for possession of a pipe bomb. A search of his home discovered 22 handguns (including .22 handguns), 27 rifles and 20,000 rounds of ammunition. Thus he became a convicted felon. 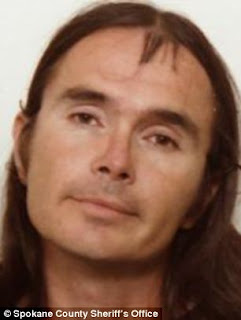 In 1989 Perry was arrested in Spokane for soliciting sex from prostitutes.

Three sex workers, Nickie Lowe, Kathy Brisbois and Yolanda Sapp, were murdered in February and March 1990. All three were shot with a .22 caliber gun, and their nude or partially nude bodies were found in or near the Spokane River. At the time investigators considered the three deaths to be part of the longer string of prostitute murders.

In 1994 Perry was again arrested for unlawful possession of firearms and ammunition, including a .22 handgun and a couple of .22 rifles. As a convicted felon Perry was prohibited from possessing firearms.

Perry was in prison in Oregon from January 1995 to October 1997. Other inmates later reported that he talked about taking prostitutes home, and talked in such a way that they thought that he was involved in the prostitute murders.

In December 1998, a prostitute who had serviced Perry at home, reported to the police that she saw a lot of guns, knives and a cross-bow. She identified his car and police officers stopped and searched it. They found attorney papers that said that Perry had “a gender psychosis disorder where he does not like females”, and other papers explaining gender transition.

Robert L Yates (also born 1952) was arrested in 2000, initially for one murder, but was then tied by DNA evidence to 12 more. He was convicted and sentenced to 408 years in prison. However Yates had been in the US Army, was stationed in Germany in February-March 1990, and so could not have murdered Nickie Lowe, Kathy Brisbois and Yolanda Sapp. The three murders were reassigned as cold cases.

Also in 2000 Perry became Donna and flew to Thailand for correction surgery.

In 2001, Yates was charged and convicted of two more murders of women. For this he was sentenced to death.

Perry said too much in 2007-8 when talking to an agent of the Department of Social and Health Services. She talked of shooting people, and said: “I knew I was going to end up dead or in prison again if I didn’t do something. I got gelded just like a horse and got my life back under control.”

In 2009 matter found under Ms Brisbois’ left middle fingernail was submitted for DNA analysis. A full male profile was developed and entered into the DNA Indexing System.


In 2012 Perry was again arrested by the Bureau of Alcohol, Tobacco and Firearms for unlawful possession of firearms and ammunition. A search of her home recovered more firearms. She was sentenced to 18 months and placed in a Federal Prison in Fort Worth, Texas. She boasted to her female cell-mate that she was a contract killer who had killed nine prostitutes. “He told me … becoming a woman was a disguise to take the heat off of him, that an elderly lady with mental illness would never get caught.” She also claimed to have killed two others after returning from Thailand.

A check on Perry’s DNA revealed a match to that taken from Ms Brisbois’ fingernail. A further match was found with DNA found on the blanket wrapped around Yolanda Sapp’s body, and a fingerprint match to Nickie Lowe’s purse etc. which had been recovered from a dumpster. A further search of Perry’s home found a box containing panties – but in a size too small to be her own. 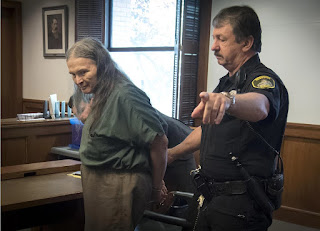 In an interview in November that year Donna said: 'Douglas didn't stop, Donna stopped it,' 'I'm not going to admit I killed anybody, I didn't. Donna has killed nobody.' And 'I don't know if Doug did or not, it was 20 years ago and I have no idea whether he did or did not.' She also said that a sex change is a “permanent way to control any violence” – that it results in “a very great downturn in violence”.

In July 2017, Perry was found guilty and sentenced to three life sentences without parole.


Yates is still on Death Row. He has contested his death sentence on the ground that he “suffers from a severe paraphilic disorder” (that is necrophilia).

*not the Playboy Playmate of November 1994.

I think that Perry was right in exploring lower testosterone levels as a way of becoming less violent.  However if she were not trans she would simply have had herself gelded.

Of course a gender change does not confer absolution for crimes already committed.

Surely, if you have secretly murdered, then

a) you should not tell anyone (ah, but the temptation to boast)

b) you should adhere to the conditions of your parole, or else you will attract the wrong kind of attention.

Maybe Donna wanted to be caught?