Avelar was born  in Chalatenango Department, in the north of El Salvador, just before the Civil War,. From an early age, despite being dressed as a boy, she came across as a girl, and most in the neighbourhood called her Karla rather than Carlos.

By the age of 10 she had been raped twice by one cousin, and another would shoot at her, and said that he would kill her as there were only machos in the family. She left without money.

In the capital, San Salvador, she spent the first six months sleeping in the bus station or on the street, begging and finding whatever to eat in the trash. She was taken in by a woman who made her work hard at domestic chores. She was raped by the woman’s son. One of her chores was to buy tortillas, but the tortillería was in a neighbourhood run by the Mara Salvatrucha (MS 13) gang.They decided to gang rape her. After 15 men, she seized an opportunity and was able to escape.

Homeless again she met a trans woman, Diana, who showed her how to survive by sex work. The more established trans whores resented newcomers. They bullied her, they called her la machorra (the dyke) because of her short hair, and they stole her money, until she learned to fight back.

While the civil war raged, the capital was comparatively peaceful. Over 80,000 were killed in the country, the vast majority by the forces of the US-backed Junta. In 1992 the UN brought the two sides together and enforced peace accords. However criminal gangs such as MS-13, reinforced by members deported from the US, tightened control.

Many – including prostitutes – emigrated to the US if they could. The term transgeneros was not yet in use. One of the terms used for trans women was locas (literally: crazy women).

There was a serial killer in San Salvador who would drive by and shoot at trans women. He became named Matalocas. It was said that he had an artificial leg. One night in 1992, 14-year-old Karla was in a john’s car giving head when she realized that he had an artificial leg. He hit her with his gun, but she was able to grab the wheel and forced a crash. She grabbed his gun as she escaped the car and threw it away. However he had a second gun and shot her nine times.

She went into a long coma, but the hospital doctors saved her. They also informed her that she was HIV+. Officials could not find her next of kin while she was unconscious, so a television station broadcast her picture, and her grandmother came to sit with her in the hospital.

Karla was the first of Matalocas’ victims to survive and who could identity him. The police had retrieved the gun which was registered. Further the man, a high-ranking military official, went to reclaim his firearm. However he was never charged with anything.

Karla was approached by William Hernández who had just founded an LGBT rights group, Entre Amigos. Karla was willing to go public. She and Entre Amigos held a press conference and gave the real name of Matalocas. The only result was that they received death threats.

After recovery, Karla returned to sex work. She and Paty Hernández organized a trans-rights group, El Nombre de la Rosa. Those working as prostitutes gave a portion of their earnings – almost like a union. At first the government refused to register the group as a non-profit, saying that its aims were “contrary to morality”.

In 1996 Karla was working near the national monument, Monumento al Divino Salvador del Mundo, when three gay men taunted her and another trans woman. They removed their belts as if to whip her and she stabbed one of them as the other trans woman fled. She alone was arrested, and sent to the notorious Sensuntepeque prison where she was gang-raped on the first day.

While the prison had a Sector 2 for gay and trans prisoners, the gang inmates were free to come and go in Sector 2 as they pleased. They treated Karla and the others as personal slaves for housekeeping tasks and for sex. She was also tortured by the guards.

The first pride march was in 1997 – this was followed by a new wave of violence. Trans women were vanishing. Between the late 1990s and 2003, the number of adult trans women known to Entre Amigos and El Nombre de la Rosa dropped from around 200 to 40. Some emigrated (mainly to the US), some died of AIDS, other were murdered.

Karla was released in 2000, suffering from being HIV+, and having lost a lot of weight. Even so, she went back to sex work. In 2006 she started antiretroviral therapy, but was shot five times for refusing to pay ‘rent’ while working on gang turf. She survived the shooting and also being stabbed twice in the back by the same gang the next year.

Karla’s friend Diane was killed, also in 2007, by her lover, a police officer. El Nombre de la Rosa had evolved into ASPIDH-Arcoiris, but Karla was not welcome, having been too pushy before. She started a new group, COMCAVIS Trans. At first it was funded by sex workers' contributions, but Karla taught herself how to do paperwork to incorporate the organization, and how to do Excel accounting. It got a USAID grant in 2011. 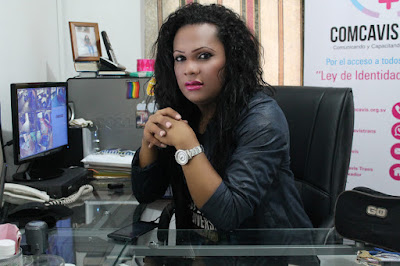 In 2010 COMCAVIS filed a first complaint against Sensuntepeque prison, and then others in 2011 and 2014. They won the trans inmates the right to wear female clothing, and then a partition was put up to separate Section 2, the same year that gang members were removed to a separate prison. Then condoms were made available. Karla visits the prison regularly to speak up for the trans inmates.

Tania Vásquez, a trans activist was murdered in 2013, and no one was ever arrested. Karla filed a complaint. The Attorney’s General Office responded with the threat to arrest Karla, a search warrant and a confiscation of the technical equipment of COMCAVIS TRANS.

However that year, Karla became the first trans woman to appear before the Inter-American Commission on Human Rights (IACHR) and to denounce the State of El Salvador for discrimination and hate crimes. Paty Hernández, emigrated in 2014 after 20 years of activism. In 2015, Karla participated in the Universal Periodic Review (UPR) at the United Nations Human Rights Council in Geneva, which submitted an alternative report, which resulted in the first UN recommendation to the state of El Salvador on LGBTI matters.

Karla frequently travels abroad to speak for trans rights to international bodies. Now about to turn 40, she is one of only a few trans women in El Salvador over 35. She is constantly receiving death threats, and has had to move seven times in the last two years. In 2017 she was announced as a finalist for the Martin Ennals Award for Human Rights Defenders, quickly followed by extortion attempts to seize whatever prize money she might get.

In a country where soldiers and death squads working for the junta killed 70,000 people, where serial killers go free, criminal gangs have impunity and young women are regularly raped on the street, an organization to protect trans women is refused registration on the grounds that it is  “contrary to morality”.