Parinya Charoenphol was born into a family of nomads who settled in Chang Mai province, Thailand. When he was eight, his parents worked looking after an orchard, not knowing that the owners were involved in illegal logging and smuggling. When caught the owners bribed the police to blame Charoenphol’s mother. After three-months imprisonment, the mother was released, and Charoenphol, as is normal for a boy of that age entered a Buddhist monastery. He was expelled at age 12 for being absent attempting to raise money for his family.

At a temple fair, goaded by a competitor, Parinya entered a Muay Thai (kick-boxing) match and won 500 baht. Charoenphol then trained for the sport, where women are not permitted, using the name Nong Tum น้องตุ้ม. The instructor’s wife noticed Tum’s femininity and bought makeup for him, and took him shopping. Tum then was able able to come out to the co-students, and was allowed to wear make-up while fighting. Tum was also attracted to the side of Muay Thai not usually featured in martial arts films: the ancient ritualistic dance moves. 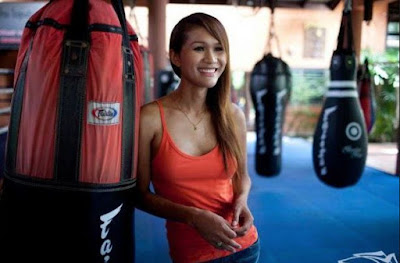 Tum was openly a kathoey and wore makeup for her first victory at Bangkok’s Lumpini Stadium in 1998, and went on to win 22 fights. After each fight she kissed her opponent to show no ill feelings. Although the Thai government had previously banned kathoey athletes from the national volleyball team, the Muay Thai officials welcomed Nong Tum. The Thai tourist industry used her in their advertising.


“I don't equate femininity with weakness. I also knew that I had to be strong, and to protect myself and the people I loved. I was born into poverty and there weren't many ways I could earn a lot of money. I don't think about gender. I think about winning.” (Hodgkinson)

In 1998 Nong Tum was invited to Tokyo to fight Kyoko Inoue, Japan’s top female wrestler, in a higher weight category, and who, like Nong Tum, had defeated male opponents. Both used the movements of their respective traditions. Charoenphol won. After the match, a young Thai woman approached Charoenphol and slapped her for the gender insult to Muay Thai.

In 1999, after a one-year professional career, Parinya announced her retirement from Muay Thai, her new career as a singer, and her intended surgery. She appeared in several music videos. She was initially declined by some of the Thai surgeons, but surgery was performed at Yanhee Hospital, Bangkok in late 1999 when she was 18.

She then found work as a cabaret performer, and continued to support her family. Her life was documented in the film Beautiful Boxer, 2003 (she was portrayed by a male Muay Thai fighter, with Kyoko Inoue as herself and Parinya in a small part as a masseuse under the name of Parinya Kiatbusaba) and Hidden Genders, 2003.

In 2004 she opened a Muay Thai camp for children, and continued to do special fights. As a kickboxer she has fought exhibition matches, and appeared in the film Mercury Man, 2006, as the hero’s transgender sibling, again using the name of Parinya Kiatbusaba.

She runs a chain of beauty parlors, and adopted a daughter, the child of a teenager who was arrested for drug offences.


“I have witnessed the terrible effects social pressure can have on younger ladyboys. I think that some of them just haven’t received any guidance in life so they choose to express themselves negatively as a form of rebellion. Many of them turn into screaming, promiscuous attention-seeking drug addicts who have lost touch with the world around them. I was also surprised to find that a lot of ladyboys don’t like women, and call them chanis (screaming monkeys). I think this dislaike is a result of their own insecurities. I have always felt a deep connection with women, even when I was still living as a man.” (Aldous & Sereemongkonpol: 251)


The actual fight with Kyoko Inoue