Casimir Kwarta, a first-generation Polish-American, trained as an engineer. In 1960 he met Ursula, a recent immigrant from Poland, although by origin a Berliner whose first husband had been the Polish artist, Ryszard Kryszczuk, whom she had hidden to protect from enlistment in the German army in the Nazi period. Casimir and Ursula married in 1963.

They felt pity for monkeys, then frequently found in pet stores, and bought several. Word got out and individuals, the Society for the Prevention of Cruelty to Animals and zoos asked them to take more. They became a chapter of the National Simian Society. Ursula’s favorites were woolly monkeys from Brazil and capuchins. They renovated the garage with large cages, but a few lived in their house in St James, Long Island.

The monkeys could cause chaos by opening jars, and hanging jewelry and even car keys in the trees. Each monkey had a name that s/he responded to. In the wild woolly monkeys live 40 years or so, but in the northern climate only 20. The Kwartas and their monkeys were featured in an article in the New York Times in November 1978.

Casimir, who had become a sales representative with an electronics company subsidized the sanctuary which barely broke even. Ursula worked around the clock looking after the monkeys. 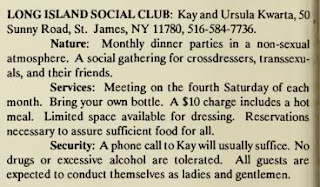 Casimir was trans, and Ursula gave full support. They ran a trans social group from 1980-1988 that was listed in TVTS Tapestry and elsewhere. Casimir, as Kay, was on hormones prescribed by Dr David Wesser.

In 1982, budding journalist James Boylan (the future Jennifer Boylan) had become friends with a trans woman photographer she refers to as ‘Casey’ - although she did not then realize that Casey was trans. They visited the Kwartas for an article for American Bystander, and Casey realized that Kwarta was trans, especially when she discovered the hormones in the bathroom.

In 1989, Casimir retired and they desired somewhere warmer. They eventually found a place in South Carolina with privacy and room for lots of animals. In addition to the monkeys, they had dogs, horses, chickens and a parrot.

The Kwartas are not listed among the notable residents of St James in Wikipedia.

A note re the anecdote in Jennifer Boylan’s autobiography. She renames the Kwarta’s as D’Angelo, and relocates them to Philadelphia. She also claims to have read Kay and claims it was she who spotted the hormones in the bathroom cabinet.
Time: 14:06