After a spell living at the YMCA, Wayne met the aspiring photographer Leee Childers (1945 - 2014) who invited him to share a coldwater walkup on 13th St. Wayne hung out at the Sewer club on West 18th St where he encountered members of Charles Ludlum's Ridiculous Theatrical Company, and also Holly Woodlawn, a friend of Tammy Novak. Leee had already photographed Holly and Tammy.

On the night of June 27 1969 Wayne was on his way to the Stonewall when he met Miss Peaches and Marsha P Johnson and realized that a riot was in progress.  He joined an impromptu march up and down Christopher Street shouting "Gay Power!".

Through Leee, Wayne came to know Jackie Curtis and Candy Darling, and the Andy Warhol crowd. After falling out with Warhol's screenwriter, John Vaccaro, Jackie moved into Leee's flat. Shortly afterwards, Holly also moved in. After Leee and Wayne had been to Woodstock, Wayne started going to Max's Kansas City at 213 Park Avenue.

Wayne's first on-stage performance was in Jackie Curtis' Femme Fatal, a women-in-prison play.  He wanted a stage name and took Wayne County, from where Detroit is located, in homage to Iggy and the Stooges. He was cast as a psychotic southern lesbian. Patti Smith played a mafia dyke, and Bunny Eisenhower was also in it.

Wayne wrote a play World – Birth of a Nation that had lots of sex and fetishes in it. It was produced, and one of the stars was Cherry Vanilla. Andy Warhol and Paul Morrissey came to the opening night, and The Village Voice gave it a rave review.

Andy Warhol had been taping private telephone conversations, and he arranged for them to be transcribed and arranged into a play, that became called Pork. Wayne was to play a character based on Warhol Superstar Viva. The play got a big write-up in The New York Times, and it was taken to England, where it opened, August 1971, at the Roundhouse in Camden Town. This was the same time as the Oz Magazine trial for obscenity. The reviews in the British Press were completely negative, but crowds came anyway. Rod Stewart and Ron Wood came more than once. As did David and Angie Bowie.

Back in New York Wayne got a gig as the house DJ at Max's Kansas City, and did some more theatre. While playing a transvestite revolutionary in a play, Wayne thought about forming a band, which became Queen Elizabeth, which took a lot of ideas from the Ridiculous Theatrical Company and Jackie Curtis, and put them to music. They played with the New York Dolls and at Max's. David Bowie's manager Tony Defries put Wayne on a retainer, but never recorded the band. 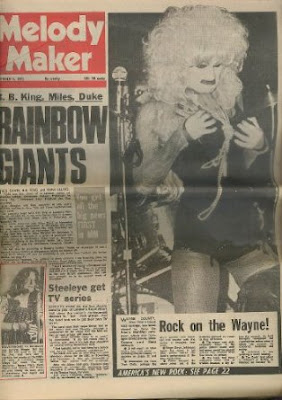 In October 1973 Wayne was on the cover of Melody Maker, and was in David Bowie's 1980 Floor Show with Amanda Lear and Marianne Faithful. In 1974 Wayne started doing shows at the 82 Club.


At this time Wayne read Canary Conn's autobiography, and felt that she wanted to be more transsexual than drag queen. She was referred to Eugene/Jeanne Hoff (who herself was starting transition) at what had been the Harry Benjamin practice. Hoff advised


"You should only get a sex change if you are one hundred and twenty five per cent sure about it. If you have the least hesitation about it, don't do it".(p100)

After starting on female hormones, early in 1976, Wayne resumed being the DJ at Max's, and working with the new band, The Back Street Boys, and wrote the song 'Man Enough to be a Woman'. A proposed album with ESP records fell through, but they were included on the compilation album Max's Kansas City: New York New Wave.

While mainly a Max's performer, Wayne did a gig at the competing nightclub, CBGBs where she was heckled by ex-wrestler Dick Manitoba, singer in the band, The Dictators, shouting homophobic taunts.  Manitoba then climbed on the stage holding a beer-mug, and County hit him with the microphone stand.   County cut his hair short and wore a false beard, but was arrested for assault some days later and spent one night in jail.   Other musicians and performers including the Ramones, Blondie, Talking Heads, The New York Dolls, Jackie Curtis, Holly Woodlawn, Divine put on a benefit to meet County’s legal costs.  Three times Manitoba failed to show in court and therefore the charges were dropped.

Leee Childers was working in London, and phoned that Wayne should be also.

Viviane Namaste doesn't seem to have a feel for how trans and punk interact.    She takes the Dick Manitoba episode and attempts to deform it to fit her theoretical position.  This attempt is not helped by her getting most of the facts wrong, nor by her disinterest: "Yet I remain uninterested in a type of historical inquiry that would establish the presence of MTF transsexuals in punk culture”.