Dymenzstein was born in Montreuil outside Paris. At age 2 the family moved to Jerusalem where the child went to a French Catholic school with children of diplomats.

At age 11 they moved back to Paris and Dymenzstein received ballet training at the Paris Opera. This was followed by twelve years as a classical dancer, including with Maurice Béjart and at the Deutsches Schauspielhaus in Hamburg.

At age 23 Dymenzstein picked a country at random and went to Japan, was influenced by Kabuki and Noh theatre, and realised that he wanted to play female roles.

Dymenzstein was back in Paris for the 1968 riots and found work in the Alcazar cabaret (which included Marie France Garcia and Amanda Lear). This required playing many roles during each performance.

She moved to Berlin to start transition into Solange for she had heard that natural hormones were available, and being of Jewish descent was intrigued to see the city that been the Nazi capital. However she found Berliners to be quite friendly.

Like Romy Haag, she opened a nightclub. She took the show-biz name Zazie de Paris (a combination of Zsa Zsa Gabor and Zizi Jeanmaire). The club attracted the likes of David Bowie and became a centre for punks, but she found it too much work and left after a year. She was a friend of Jayne County. 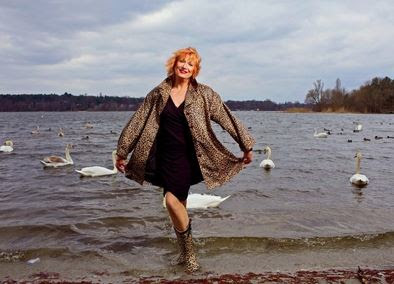 In the 1980s Zazie started working in theatre with noted directors Jérôme Savary and Peter Zadek. She acted in minor films from 1982 onwards, but her breakthrough was with Werner Schroeter's film Deux (Two) in 1980 where she played a character called Zazie.

Solange completed her gender affirmation.  Later she was in the euthanasia-clinic comedy Kill Me Please, 2010 and Mario Fanfani's Les nuits d'été, 2015.

Usually she was denied cis female parts, but she has recently been working in the Tatort cop series on German television where she plays the best friend of a police Commissioner.

Solange now considers herself a Berliner, and has said that she will probably never leave.
DE.Wikipedia    IMDB