Viktor Kalnberz, of Latvian descent, was born in Moscow. Both his parents graduated from the Medical Faculty of the Moscow State University. They were sent to practice in Kyzyl, the capital of the Tuva People's Republic.

They returned to Moscow in 1936, and in 1941 to Riga, Latvia as the Great Patriotic War opened. The parents worked in an evacuation hospital. Despite these disruptions Viktor graduated high school and studied at the Medical Faculty of the University of Latvia 1945-51. From 1951 Kalnberz worked at and then led the Riga Institute of Traumatology and Orthopaedics.

He became internationally famous for transplanting fingers from dead persons onto live persons who needed them. He pioneered penis prosthesis technology at a time when Soviet orthodoxy was at best disinterested in treating impotence. He was a deputy of the Riga City Council 1963-7. 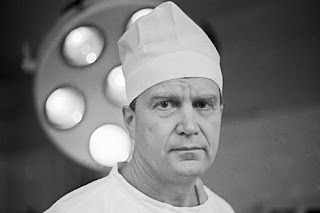 He had already performed four sex correction operations on intersex patients, when in the winter of 1968 he was approached by a 29-year-old trans man, an engineer who had already attempted suicide three times, whom we know only by his female name of Inna. Kalnberz treated him over the next four years.


“A medical council was convened; there was an endocrinologist, a sexopathologist, a gynaecologist, and a psychiatrist on the panel. They all agreed that conservative treatment methods were very unlikely to succeed in this case. The head of the Latvian republic’s health ministry had the last word. He gave us the permission, but did not actually sign any papers."

In September 1970 the operation was approved, and it was done in stages.


“He was very afraid that people would learn about the operation. That is why when they gave him his new ID and other documents, I asked him not to give me his surname or address. I don’t even know his phone number. The only thing I asked of him was to give me a ring every now and then, and tell me about his condition. The last time I heard from him was more than five years ago. He was just under 70 at the time."

Inna continued as an engineer. He married twice, and explained his scars to his wives as resulting from a car accident. Dr Kalnberz was summoned to several inquiries, but got off with a stern reprimand. The surgery on Inna was kept secret for 20 years.

In 1974 Kalnberz was issued a US patent for his penile implant using polyethylene plastic rods – in all he held 23 patents in different countries. He did a further five sex-change operations. He was a member of the Supreme Soviet 1975 – 1990. He treated Soviet cosmonauts, made a women's shortened leg longer by 60 cm, was a consultant to trauma teams across the USSR, in Tokyo, Munich, Moscow and at the Montreal Olympics. He worked with the army in Afghanistan where he developed an external fixation device to treat complex gunshot fractures.

He became a Hero of Socialist Labour and an Academician of the Academy of Medical Sciences in 1988 and was given many other rewards.

Kalnberz is admirable enough as is.  Why does Gnedinskaya spoil it with the false claim of Inna's operation being a world's first?
Time: 08:45