Victor Fernández was born in Santurce, Puerto Rico. His father persistently denied that such an effeminate child could be his.

Victor moved to New York soon after high school, where she became Vicky Starr and a performer.

In the 1960s she moved to the San Francisco Bay Area and started female hormones with great success. She was able to work in a bar in North Beach as the district's first topless dancer. Conforming to the conventions of the time, she ended the act be taking the microphone and in a baritone: "I've got a secret. I'm a man!". 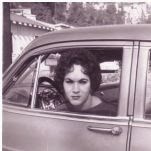 After surgical completion and several husbands, Victoria remained active in the Latina gay/LGBT/queer community. In the late 1990s she participated in the community oral history project.

She also amassed a personal archive documenting her life in the city, including her performances as “Mr. Vicki Starr,” friendships with fellow transgender women, and sex work. With funding from Center for Chicano Studies Horacio Roque Ramírez & Rolando Longoria have been digitizing her collection.