Billie Dodson was raised in the town of El Monte, California which was founded during the 1849 gold rush and is today part Los Angeles County. From the time of his birth his mother was an invalid. He spent his childhood by her side sewing, knitting and crocheting. When she died he stayed with his father doing the cooking, mending and housekeeping, and tending to the younger children.

When Billie left home, he went into vaudeville as a female impersonator making his own costumes. Being feminine came naturally to him, and he met acclaim for his performances. 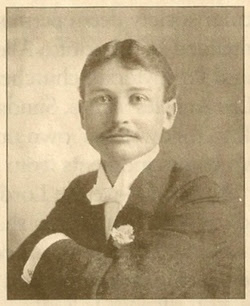 However he felt obliged to return home to look after his father and step-mother. He hung out a shingle in El Monte as a milliner, and sold hats, corsets, garters etc. all made by himself. His shop became a women's social center where they would talk and talk and drink tea. His creations were sough far and wide. Also at family gatherings Billie would socialize with the women, and avoid the men.


"The odd thing about Billie Dodson is that he lacks the offensive and wholesome suggestion that usually lingers about an effeminate man. He is more like a kind-hearted, sensible, cheery woman."

In 1905 Billie married an actress who had newly arrived from Seattle. Two years later Mr Dodson sought and was given a divorce. He married again in 1910. He then returned to the stage with a two-year engagement on the Pantages circuit.