Stanley Biber was raised in Des Moines, Iowa by a father who owned a furniture store. He trained as a concert pianist and attended a rabbinical seminary. During World War II he was a civilian employee of the Office of Stategic Services and stationed in Alaska and the Northwest Territories. He graduated from the University of Iowa Medical School in 1948. He was an outstanding weight-lifter and just failed to make the US Olympic team. He was a MASH chief surgeon with the US army in the Korean War.

In 1954 he took a job at a United Mine Workers clinic in Trinidad, Colorado, a town where Frenchy Vosbaugh had operated a restaurant in the late nineteenth century, where Malvina Perry had been taken to court for her circus act, and just east of Segundo where Alice Baker had worked as a male teacher. Biber was the only surgeon in town, doing everything from gunshot wounds to Caesarian births to appendectomies.

He bought a small ranch and 25 head of cattle, and then expanded it. One year he took a bull to the Colorado State Fair and placed second in his class.

Biber did his first sex change surgery in 1968 for Ann, a social-worker friend who had been completing her real-life test without his realizing. Biber consulted with Harry Benjamin, who had started Ann on estrogens, and then sent to the Johns Hopkins Hospital for diagrams describing Dr. Georges Burou's technique.

Trinidad's only hospital was Mount San Rafael, a Roman Catholic hospital. After hiding the first few cases because of possible objections, Biber gave a series of lectures to the local Ministerial Alliance about the psychological needs of transsexuals and what his surgery entailed.


"Much to my amazement, there was no opposition. They were very understanding and accepting. All of a sudden, townspeople became very sophisticated and knew everything about transsexuals."

However there was some reaction: a colleague resigned, in part because of the transgender surgeries, he had problems with insurance, and was admonished for poor record keeping. On the other hand the surgeries brought in almost a million dollars a year and definitely helped the hospital remain financially viable. A local was reported as saying:

"After my hysterectomy, I went to Denver, and one of my friends said, 'You didn't let that doctor do it.' And I said, 'I certainly did.' They looked at me funny. 'But he does that kind of surgery.' And I said, 'Which proves how good he is. You have to be darn good to do that.' They never thought of it that way."

In the late-1970s when the Johns Hopkins Gender Clinic and others closed, Dr Biber became the major alternate source of transgender surgery in the US. Fletcher summarizes Biber's approach: 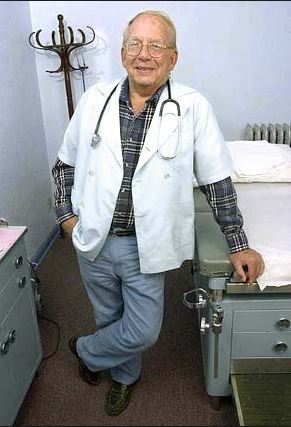 "First, patients must pass at least two psychiatric evaluations ensuring that they're not homosexuals or transvestites or simply people seeking fame and fortune on the talk-show circuit. True transsexuals, Biber says, are not attracted to members of the same sex and do not become aroused by wearing clothes of the opposite sex. True transsexuals consciously and subconsciously believe they are members of the opposite sex, trapped in the wrong body. ... Next, patients must receive hormone therapy for at least a year and live in the role of the opposite sex for the same period. If the adjustment is successful and another evaluation approved, plastic surgery is recommended. Then, and only then, will they get a consultation with Biber, who makes the final call. If he senses doubt, hesitation or confusion, which he does about 5 percent of the time, he sends patients home. As a consolation, he often performs minor cosmetic surgery first, such as an Adam's-apple reduction or breast augmentation."

He quotes the doctor:


"After doing so many of these, you develop a gut feeling. A bell will go off and you'll know something is wrong, even if they came with good evaluations. You certainly don't want to make a mistake. You've got to have a feel for if they're really worried about being a transsexual or if they're just scared of the surgery. It helps me in my own mind to know I'm doing the right thing."

Dr Biber went on to do thousands of the operation, resulting in Trinidad, Colorado becoming known as the “Sex-Change Capital of the World”, and also trained other surgeons in transgender surgery. He  became a celebrity and appeared on the Oprah Winfrey Show, Sally Jessy Raphael Show, Geraldo Rivera Show, the Learning Channel, the Discovery Channel, the Playboy channel and the Guinness World Records Primetime TV show.

He and his wife had seven children, he owned the largest cattle ranch in the county, and served as a Las Animas County commissioner from 1990 to 1996.

Dr Biber would also mention in interviews that he did the operation on twins, on three brothers from Georgia and an 84-year-old railroad engineer.


"I've got one patient married to a gynecologist, and he doesn't know: She won't tell him."

He performed three reversals: The first patient, whose original operation was performed by another surgeon, proved not to be a true transsexual and developed psychological problems. The second was a renowned mathematician who succumbed to intense peer pressure. The third patient used the procedure to appear on talk shows, then decided to switch back. (Heyer?)

Dr Biber retired at the age of 80, when his malpractice insurance became too expensive, although he was able to find insurance to continue as a general practitioner. His transsexual practice was taken over by Marci Bowers.

Biber died at age 82 from complications from pneumonia, shortly after returning from a cattle drive to Texas.
EN.WIKIPEDIA
Time: 10:04