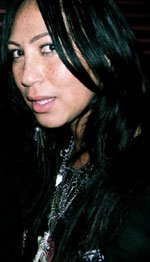 Te Wake, a Māori, was raised in Ascot Park outside Wellington. She moved to Wellington in the early 1990s and then to Auckland.

She toured New Zealand in the R&B/Funk band Pure Funk in 1995-6. She released an EP in 2002, and from 2004 became a presenter on Takatāpui, Māori Television’s first GLBT show.

In 2005 she was a co-host at Pasifika, the world's largest Polynesian culture festival. In 2011, for Takatāpui she covered the death of activist Carmen Rupe.

The same year she directed a 25-minute video Pacific Voices for the New Zealand AIDS Foundation, and a series on Maori TV I Know A Sheila Like That, featuring Maori women.
EN.WIKIPEDIA     Linkedin  MySpace