Angela was born to Italian immigrants in the US Midwest. Her father was a macho cop who sometimes beat his wife and child. Angela was criticized for being too much like her father, especially after her mother died when she was 12, and her father remarried.

At 15 she was sent to a boarding school run by nuns. The next year she transferred to an aspirancy, a training school for girls who aspired to be nuns, but was sent home after trysts with a classmate were discovered. She trained as a nurse, and with the encouragement of a favorite nun did enter a convent as Sister Mary Dominick, but after further love involvements, felt that she had to leave.

Angela then left her first lover who was a lesbian, Angela feeling rather that he was a man who wanted a male-female relationship. While working as an operating-room technician, Angelo found a pregnant woman who accepted him as a man, but she died in childbirth.

Angelo's next girlfriend, Rebecca, had religious objections which were not quieted by the copy of Radclyffe Hall's The Well of Loneliness that he gave her to read, but did finally accept that Angelo was becoming a man.

When Christine Jorgensen's autobiography came out in 1967, Angelo (and many other transsexuals) attempted to contact Harry Benjamin.


"And scared was the word. No other word adequately described my feeling as I picked up the phone and put in a long-distance call to the man I wanted most in the world to see, Dr Harry Benjamin. His amiable secretary explained that the doctor was away. She would, however, refer me to a most reputable physician in the city where I was working. 'He can advise you,' she said, 'and make recommendations.' I thanked her and placed the call. That secretary said the doctor had just left on vacation and she had no recommendations to offer. I phoned the county Medical Society and was given three names, among them that of Dr Patterson. My fourth call was to his office.(p143"

Dr Patterson answered his own phone and told Angelo to come right over. After a physical and one session with the psychiatrist in the next office, Angelo was approved as transsexual and started taking testosterone. The physical transition caused a rift with Rebecca who again raised her religious objections. Dr Patterson was apparently stringing Angelo along with assurances that referrals were forthcoming, but eventually Angelo realized that Patterson has no such contacts.

However he became friends with Nick, another patient of Dr Patterson. an East European immigrant who had already had a mastectomy and hysterectomy. Nick found Dr Lake in an out-of-town hospital who was willing to did a mastectomy for high fees. Angelo and Rebecca made up, Angelo had his first phalloplasty as the first-ever such patient of a Dr Fogle, which however became infected and had to be removed.  He did not attempt phalloplasty again for another four years, this time with Dr Robertson in the Midwest.  Again complications set in and he lost the tip.

He tried without success to reconcile with his father. Even when the father was dying after a stroke and heart attack, they were not able to make peace.

Angelo legally changed his name, and he and Rebecca were married. He was employed as a nursing supervisor in Lake's hospital. 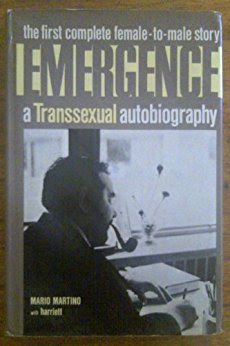 As Mario he published his autobiography, the first such in the modern sense by a trans man, in 1977. The book is dedicated to Harry Benjamin and to Rebecca, and includes a short Foreword by Benjamin.

Angelo studied for a PhD in counseling psychology which he completed in 1979. Sometime in the early 1980s he dropped out of sight, and wasn't heard of again.

It is rumored that he married a second time, moved to Florida and passed on in 2011.

Martino was insistent that he was not and had not been a lesbian, and conceived of FTMs as heterosexual men.   As Califia notes: “It would be interesting to see his reaction to the FTMs with gay male identities who are becoming more vocal today(p46)”.

Another group that Martino did not identify with was trans women:  “But the male-to-female patients were another story.  Too few of them acted like any other female, either in speech or in manner.  The extroverts among them referred to each other as closet queens, shrilled out their demands, showed their newly constructed vaginas to anyone who’d look, and used language that I’d never heard from a woman (p209-210)”.

Was Emergence the first autobiography by a trans man?   Several of the 18th and 19th century trans men wrote auto biographies of a kind, but the assumptions and social constructions are quite different from those of the 1970s.   However Robert Allen’s But for the Grace: The True Story of a Dual Existence London: W.H. Allen 1954 surely counts as a modern trans man autobiography.
Time: 12:56