According to the author page in Man into woman, Eric Gilbert Oakley was the son of T. Gilbert Oakley (? - 1953) of the National Association for Mental Health, Chief Consultant to the Pelman Institute (which promoted courses in willpower and mental exercises) and author of books on psychology and feelings of inferiority.

Eric lists his higher education as Skerry’s College (which prepares for civil service exams) and the Glasgow School of Art. However he puts a D.Psy after his name, which presumably was not acquired at either Skerry's or the GSA.

After military service in the Second World War, and six years on the stage, Oakley became editor of the monthly Health Magazine, and wrote more than 60 books. Like his father he wrote about self confidence and psychology. He also wrote about sex. He married and became the father of a daughter.

In 1964 he published Man into woman: the amazing account of a male's change into female, with full psychological and medical case history and personal analysis questionnaire, which purported to be a biography of Juliet Griffiths who had gender surgery in Casablanca in 1950. I have analysed this, and came to the conclusion that it is a clever fraud.  It does however portray Griffiths as a pioneer and a star despite her early death, and its implication that you needed lots of class privileges to transition.

During the 1960s Oakley studied female impersonation and decided that he could offer something different. He started doing one-night drag acts under the name of Linda – one-nighters being compatible with his work as a writer.

In 1970 Oakley published Sex change and dress deviation. He followed the usual convention of two 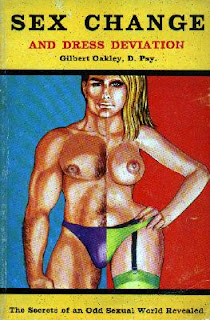 sections: one on Transvestism and the other on Trans-sexuality. He explains that


"Transvestism is a mild form of sex change … and involves not merely a change of clothing but a distinct attitude of mind that expresses a desire to adopt the feminine role in society".

He identifies different types:
In the introduction to the Trans-sexuality section Oakley writes


"The author considers that any man who is prepared to face such hazards is worthy of the greatest possible respect and consideration from everyone involved".

Note that he writes 'man' for trans woman, and he repeatedly refers to the operation as a phallectomy rather than a vaginoplasty - which means that he regards it as a removal rather than a gain. He seems to regard trans-sexuals as a special cases of effeminate men:


"The feminine mind in the male body can produce the image of effeminacy.  The degree of femininity will determine his sexual role which will be chosen from three possible alternatives, i.e. the passive (femme) homosexual, the transvestite, or the trans-sexual.  Trans-sexual identification with the female embarces not only the feminine mind, but the body as well.  Unlike transvestism, this identification with the female is rarely, if ever, acquired.  Transvestite and effeminate men are born with a predeliction for feminine habits and characteristics, but the trans-sexual is born with definite physical characteristics which interrect with his mental attitude."


He claims in chapter 12 that at the time of writing


"it is said that at Hammersmith Hospital alone no less than twelve sex-change operations are performed every month".

On the next page he writes


"Trans-sexual males are seldom sought after by homosexuals since they approximate far too closely to the woman who is of course, the sexual 'enemy' of the homosexual male".

Unfortunately he does not stick to this generally true observation elsewhere.

Oakley's typology of trans-sexual personalities is:
On the last page of the book Oakley writes:


“From his observations, the author is convinced that the transvestite is far happier than the trans-sexual. Life is by no means so complex, so painful, or so embarrassing for them. The future is not obscured by a mist of hopefulness and doubt. The best of two worlds lies within the transvestite's grasp, for he can change from male to 'female' at will.

The author concludes, therefore , that the sex-change phenomenon is wholly and completely disastrous, and that medical bodies the world over are seriously at fault in encouraging it in any way when other means of therapy are surely at their disposal to help these unfortunate people."

The 1970 Oakley and the Montmorency book were both published in 1970.  Both books are the same size and shape, both are dominantly yellow and both have a partial title but no author on the spine.  One is published by Morntide and the other by Luxor.  However both Morntide and Luxor give their address as 50 Alexandria Road, London SW19.

There is no mention at all of Virginia Prince, although the Beaumont Society, the British version of Prince's group, had been founded in 1967.  Initially it had very little impact.   Also note that while the book came out a year after the Stonewall riots, they too are not even mentioned.

It is not obvious how to read the 1964 Man into woman.   Having established that it is not true, we could read it as Oakley’s wish life.  Which of course would be in marked contrast to his 1970 rejection of gender surgery.  Which of course parallels Prince who wanted surgery in the mid-1950s but later dogmatically told everyone that they should not have it.

The anti-gay, anti surgery platform which is now associated with Prince is found here in Oakley and demonstrates that it was not derived from Prince.  Unlike Prince Oakley does not differentiate transvestism from female impersonation, and like Susanna Valenti he was a performer.   He seems to think that female impersonators are mainly heterosexual – a very different point of view from that found in Kris Kirk’s Men in Frocks, and a point of view that became very hard to maintain as time went on.

1970 was probably the latest that such ignorant comments about both homosexuals and transsexuals could be published.
Time: 22:39