Keith Caputo grew up in Brooklyn, NY. Mother OD’ed at age 20. Father was a drug dealer, in and out of prison, a tattoo artist, and able to rebuild old cars.

Caputo was mainly raised by his paternal grandparents, and was experimenting with female clothes from age eight or so. The teenage Caputo took classical piano lessons, but then, at the urging of a cousin started singing with garage bands. By age 18 Caputo was going out as her female self, to New York nightclubs such as Escuelita.

While in college Caputo sang with the heavy metal group, Life of Agony, and was on their 1993 album, River Runs Red. After the third album in 1997, Caputo controversially left.


“People started to resent me because I quit the band at the height of our — we were about to explode on radio. … I was different by nature, and it really wasn’t my style to be sleeping with a million different girls. I’ve experimented with some drugs, but I wasn’t really like seriously addicted to any substance, you know?”(Petros)

Caputo had girlfriends, was usually faithful, but also experimented with men.
A new group, Absolute Bloom lasted only a year.

Caputo’s father was released from jail for good behaviour in 2002, and died that same night after taking drugs. He was 56.

Caputo worked with the Brazilian band Freakx which had broken up a decade earlier. They put out an album in 2003. The same year Caputo did a reunion with the original Life of Agony, and formed a new band which recorded as Live Monsters. Caputo also put out solo albums. 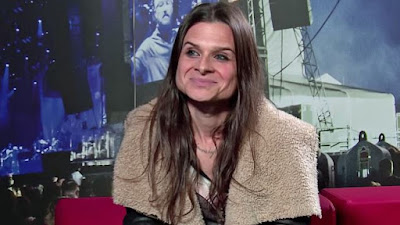 “There is no right or wrong way of how to express your human nature. It was odd growing up identifying as a woman. My subconscious sex is female, living in a male body — it was difficult. It was confusing. It was depressing.” (Petros)

She continued to perform with Life of Agony, and her first solo album as Mina was As Much Truth as One Can Bear.
EN.Wikipedia