Swin was born in Chicago, and did a degree in chemical engineering. Swin became an expert in polymer construction and design, and at 23 founded Tec Air, Inc. in Willow Springs. Illinois. Swin conceived a method – which was patented - of balancing fans by inserting adjustable screws into hollowed-out sections of the mold insert that is used to form the fan hub. Tec Air grew to annual revenues of over $20m.

In 1990 the US arm of Denso Corporation (株式会社デンソ) approached Tec Air to submit a quote on manufacturing fans, which revealed to Tec Air that its patents were being infringed. From 1992-9 Tec Air won a series of lawsuits and was awarded $25m. 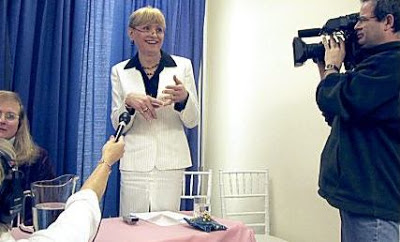 In 1999 Swin sold the business, and transitioned as Rikki. She founded an Institute, originally called Gender Education Research and Library, but then renamed for herself when the original acronym was spelt out, endowed it with $5m and purchased archives from Virginia Prince, Ariadne Kane, Merissa Sherrill Lynn, Betty Ann Lind and the International Foundation for Gender Education (IFGE). It opened on March 22, 2001 to coincide with the 15th Annual Conference of IFGE which was held that year in Chicago. Swin had co-sponsored the Conference but was not present at it. She provided charter buses to ferry the Conferencees to the Institute's $2m building in down-town Chicago for a catered reception, but the actual collections were not on view. Swin said that the Institute was "primarily designed to help the mainstream world understand the transgender one, to break down Jerry Springer-like portrayals of transsexuals, and to show the community in a positive, productive light" and "that the transgender population represents an underused research pool that can help conduct anecdotal or scientific research" on gender differences. Trans activist Alison Laing was hired to work on the collection, and academics Ken Dollarhide and Susan Stryker were allowed to access the unorganized material.

The RSI took out full-page adverts in Transgender Tapestry, but then disappeared in 2002. The building was reportedly empty. The phone number was out of service. Many people wondered where the archives had gone to.

Dallas Denny’s quite reasonable "Where's Our History?" was written for Transgender Tapestry in 2004, but was repeatedly delayed by Executive Director Denise Leclair for three years.  This was the “biggest factor” in Dallas resigning as editor.