Maurice grew up in London’s West End, in a flat off Tottenham Court Road. His father was an alterations tailor. From the age of 5 he became fascinated by women’s clothing.

He married at 23 and he and his wife had five children. In his 30s he briefly tried painting as a way to escape depression. In the 1980s he watched one of the television programmes about Julia Grant's transition, which clarified what he really wanted. In 1991 he met a few trans people in clubs and went a drop-in centre for transgender people (the TV/TS Support Group at 2 French Place, Shoreditch?). This released his tensions, but led to a row with his wife. An attempt to take her to the drop-in centre made things worse. At his wife’s request, he went to four psychiatrists, but to no avail.

By the early 2000s his wife was descending into Alzheimer’s disease. In 2002 she was taken into a care home.

Now 58 and working as a quantity surveyor, Pepper started dressing as female outside work. After a trip away ‘cross-dressed’, she couldn’t go back to male clothing. The next day she went into work as a woman. She endured a few days of everyone at work coming around to look at her, her boss then accepted that it was a permanent change, and a disabled toilet was designated for her use. She changed her legal name to Margaret. 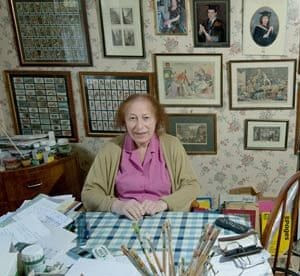 Her wife sleeps all the time, and has no idea what Margaret has done. Four of the children had accepted what she has done, but still call her Dad. Margaret now feels much more outgoing.

She now paints regularly, and was one of 53 artists rejected by the BP Portrait Award who put on an alternate exhibit.
You can see her paintings at http://conceptualpainting.com.