Elvira Virginia Mugarrieta was born in San Francisco, the second of five children of Jose Marcos Mugarrieta and Eliza Garland. Mugarrieta, an officer in the Mexican Army and then the first Mexican consul in San Francisco, was fired for political reasons, and never getting his back pay, remained in the city as a Spanish teacher and translator.

The child Elvira was a tomboy. Her father died when she was sixteen, and she was sent to a convent school. She escaped that by marrying a friend of her brother. They traveled together for some months and then separated. Elvira then traveled alone, frequently dressing as a young man, and frequently passing, except that he claimed to have lost his voice in an accident, and communicated by writing. 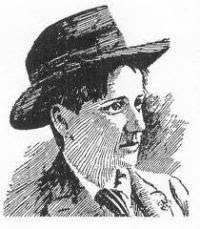 Although he was then twenty-eight, as a man he was taken to be eighteen. In 1897 he spent time in Stockton, California. Rumor went around that there was a woman in town posing as a man, and the police allocated resources to find the person. When they found her, she explained that she passed as a man to travel and to work, and that the law allowed this as no crime was intended.

As 'Babe' Bean, she became a local celebrity: she was invited to join the local Bachelor Club, and made a small living writing for The Stockton Evening Mail which supplemented his private income. Some women protested that Bean was receiving special treatment in that the rest of them would surely be arrested if they wore trousers in public. Babe wrote to the local paper encouraging them to dress as they pleased, and pointed out a few current bargains on men's clothes.

In May 1898 Babe was injured when his horse and buggy encountered a span of runaway horses. After this he did talk.

Following the Philippine Revolution, 1872-8, and the Spanish-American War of 1898, the US claimed the Spanish Empire as their own and switched from supporting to opposing Philippine Independence. In October 1899 Babe as Jack Bean, managed to get on a troop ship to the Philippines. At first he was a young man working his way across. But when he ran into problems she revealed her sex and was put off in Hawai'i. Admired by the troops for being spunky Bean was smuggled back on the ship and finally smuggled off in Manila. By this time Bean was a minor celebrity and although still dressed as a man, and often passing, Bean was generally known to be a woman. She wrote for the newspapers, and usually traveled with the 29th Infantry Regiment. She also worked as a nurse and a translator for the soldiers. When she fell ill of exhaustion after a year in the Philippines, the troops made a collection and sent her home. Jack’s story appeared in the 21 October 1900 edition of San Francisco’s Sunday Examiner Magazine as by Miss Babe Bean.

On return to San Francisco Bean conformed to female dress for a short while, and was listed in the 1900 census as Elvira living with her mother Eliza. However feeling a need to prowl the city after dark and to write about it, he reverted to male dress.

In 1903 San Francisco passed a new law banning all wearing of opposite sex clothing, and so Elvira disappeared and became Jack Garland (his mother's maiden name) on a permanent basis - neither Elvira nor Jack appeared on any later census. Jack took a particular interest in the poor and outcast, and would often give them money for food.

After the 1906 San Francisco earthquake, he worked as a male nurse for the Red Cross. He continued to make a small living as a journalist, and still had his private income.

In 1936, at age sixty-six he collapsed on the sidewalk and died of peritonitis. At the autopsy he was once again revealed to be a 'woman'. His family did not respect his choice of gender and he was buried in a white satin dress.

Several of the accounts, including Boag, incorrectly claim that Garland sailed to Manila as part of the Spanish-American War.  This is quite wrong as that war had finished.  It was part of the next, the US crushing of Filipino Independence.

In his article for the San Francisco Examiner, Garland wrote: “A newspaper woman and the daughter of an army officer, all my ambition and interest and inclination naturally gave me the fever to go to Manila when things were at their liveliest there”.  He was of course the daughter of a Mexican army officer, an officer who had served in the US-Mexican War of 1846-8, or as Mexico calls it, la (primera) intervención estadounidense en México.  Jose Marcos Mugarrieta saw action at several battles against the US including at Mexico City, 1846. So it is certainly ironic that his daughter wrote jingoistic prose identifying with the US invasion of another country.   Sullivan does not discuss this angle.

In 1897, in Stockton, Babe Bean declared that there was no law against transvesting. There was no US or California law, and I know of no Stockton law.  However San Francisco has passed such a law in 1863 and San Jose did so in 1882.  We mentioned the San Francisco law when discussing Ferdinand Haisch and the San Jose law re Milton Matson.  Apparently the San Francisco police did not apply the 1863 law against Garland, perhaps because they knew his parents.  It would seem however that he regarded the new law of 1903 as a signal that Elvira should now disappear completely.

In the 1890s there were, of course, no trans support groups, no male hormones and the major social construction, of what Garland was, was ‘inversion’ that regarded trans and homosexual as the same thing.  During the best documented period of his life, from 1897 to 1903, he was known as female-bodied, and was regarded as a spunky girl rather than as a man.  This raises a question of which pronouns to use.   He was generally perceived as a woman, even when in male clothing, until after 1903, and Sullivan who before that date switches back and forth between ‘he’ and ‘she’, switches definitely to ‘he’ only after that date.
Time: 02:20