As in most countries, so in nineteenth-century Mexico, on the stage, in carnival, at balls, there were those who transvested. A notable example, in the first week of September 1894, was a formal ball presided over by the Governor of the Federal District, Pedro Rincón Gallardo y Terreros, and attended by José de la Cruz Porfirio Díaz Mori, the President (1876-1911). El Universal, 7 September, reported the presence of several young men costumed as women, in particular, one F. Algara who was dressed as a a royal Lady in Waiting.

On 17-18 November 1901, two weeks after the transformista Leopoldo Fregoli had performed in Mexico City with his quick changes into and out of female costume, there was a private ball next to 4a calle de la Paz (now calle Ezequiel Montes). The local policeman noticed many carriages depositing passengers, and investigated. He discovered 41 male-bodied persons dancing, 19 dressed as female.  He called reinforcements and they were all arrested.

It was quickly rumoured that there was a 42nd person, but that he was Ignacio de la Torre y Mier, Porfirio’s son-in-law, and that, perhaps after a payment, he was permitted to leave. There was an alternate rumour that the 42nd was a woman. It was also said that at midnight there was to be an auction of an attractive young man. Some said that the next day, those arrested en femme were obliged to sweep the streets in their finery, but like most details of this event, this too is unconfirmed.

No list of the 41 was ever issued, not even a century later. Most of the newspapers suggest that the 41 are young men from “well-known families of good standing (Monsiváis, 2003: 148)”; that they included lawyers, dentists and even priests, and that some of them were from a well-known group of dandies who were known for their stylish men’s clothes they they paraded in on the fashionable streets. There was no trial, but the arrested were inducted into the army and sent to do forced labour in the Yucatan where a Mayan insurgency (the Caste War) was being suppressed with the assistance of the UK government.

However only 19, not 41 were sent. Monsiváis, 2003 says: “At no risk of slandering the proverbial probity of the judicial apparatus in 1901 Mexico, it can be said for certain that 22 or 23 of the victims of the Redada buy their liberty”. El Popular excused the discrepancy in that some had attended the party without knowing its nature. The opinion was also expressed that only those who transvested were really ‘maricón’. This of course fits in with the Latino attitude that a man can can have sex without being a maricón if he plays only the male role. Other newspapers assumed that the 19 transported were those who had transvested, but this is not confirmed. There is no record of the return of the 19.

Three weeks later, 4 December, there was a police raid on a lesbian party in Santa Maria, but far less attention was paid to it.

Mexico, later than other Latin American countries, had adopted the Napoleonic Code in 1871 following the French Occupation, so in theory sodomy, homosexuality and transvestity were all legal. However as a concession to traditionalist opinions the same penal code of 1871 contained Article 787.


Shortly afterwards a series of handbills were distributed which included José Guadalupe Posada's engravings about the raid along with satirical verses. In 1906 Eduardo A. Castrejón published a novel titled Los cuarenta y uno. Novela crítico-social, which told of two women who find out that their fiancés were in the raid. 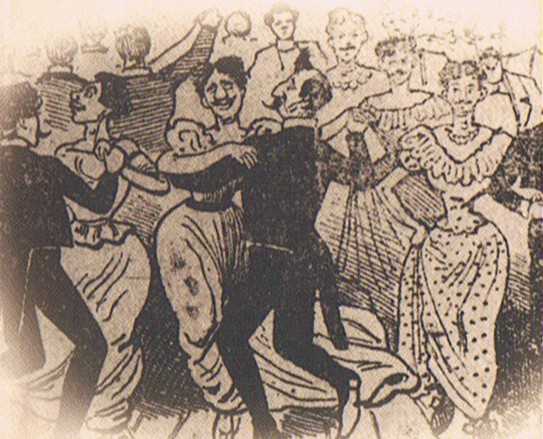 In total Los 41 became such a media scandal that for several decades homosexuality, effeminacy and transvestity came to be regarded as the same thing. 41 became a taboo number in Mexico. No division, regiment, or battalion of the army was given the number 41. No-one was number 41 on a payroll. Street numbers skipped 41. No hotel or hospital had a room 41. Nobody celebrated a 41st birthday. In recent decades gay organizations have embraced the number, using it as a name for bars or associations.

The centenary was commemorated in 2001 in New Orleans by Tito Vaconcelos, the gender performer, who put on a one-person play, Doña Caralampia Mondongo lo sabra y te lo cuenta todo, wherein an imagined drag alter of journalist Ireneo Paz, grandfather of Nobel Laureate Octavio Paz, whispers to us the secrets of life under the Porfirio regime. This was followed by a symposium at Tulane University, which resulted in the 2003 book, with a closing dinner exactly on 17 November.
ES.WIKIPEDIA   EN.WIKIPEDIA
____________________________________________________________

The concept of ‘affronting public morality or good habits’ is found in several Latin American law codes.  Both public morality or good habits are undefined, and charges are at the whim of the police.  Presumably the illegal lack of a trial is so that the existence of maricónes need not be conceded and the curiosity of the young need not be aroused (Monsiváis, 2003: 156-7).  However as the raid became a media scandal, that intention was thwarted.

The 2003 book reprints several of the newspaper accounts in the original Spanish and in English translation.   It would seem that lacking any real facts, most of the stories were made up, and tell us more about prejudices at the time rather than what really happened.  The conflation of transvestity, homosexuality and pedophilia is obviously such a prejudice, but also the idea that a dandy (a homeovestite) is likely to cross-dress.

In England effeminacy was more associated with a type of heterosexuality before the Oscar Wilde trials in 1895.  So a similar change happened in Mexico in 1901.  Los 41 is an example of how the social construction of sex and gender can quickly change because of one incident.

So the commemorative symposium at Tulane University ended with a dinner.  Surely the logical conclusion should have been a drag ball.


Ignacio de la Torre y Mier employed a groom on his estate by the name of Emiliano Zapata, who of course played a major role in the Revolution that broke out 9 years later.  The Mexican Revolution, unlike the Cuban, never evolved past its initial sexism to embrace GLBT rights.

The es.wikipedia article claims that one of the 41 was Marcus J. Moix.  It describes him using the rude term ‘garchados’ and accuses him of spreading venereal diseases.  The immediate footnote references do not even mention anybody called Moix.  I am surprised that the term and the lack of confirmation meet Wikipedia’s standards.

Ironically in Christianity, 41 represents 39 lashes received by Jesus plus one for the spear in his side and one for the crown of thorns.
Time: 13:57