Trasobares was born in Figueres, also the birth place of Salvador Dalí. She transitioned surgically in London at the age of 17.

Manuela was trained as an artist by Dali, and then at the Sant Jordi Faculty of Fine Arts, at the Universidad de Barcelona. She also trained in music at the conservatory in Sofia, Bulgaria, and sang with the National Theatre of Sofia, and the Opera Theatre in Plovdiv. She was eliminated from several international singing competition, despite her obvious training, because of her gender status. 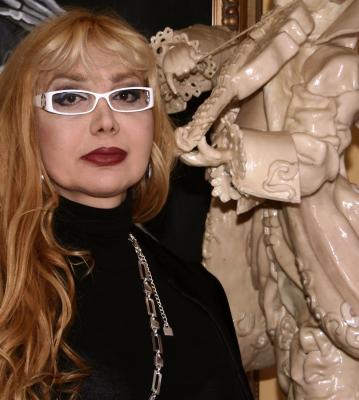 Her style as an artist has gone from surrealism to hyperrealism.

She was also an activist for transsexual rights. She married a man in 2006, and almost all the 900 residents of Geldo in Castellón, the village where she lives, attended the ceremony.

In 2007, she ran successfully as a Democratic Republican Action candidate for a council seat in Geldo making her the first trans person in Spain to hold elected office.

Also that year, two of her sculptures on religious themes were excluded from the Espai D´Art Contemporani de Castelló, because of pressure from a traditionalist Carlist group.

In 2008, she ran unsuccessfully for the national Parliament as a Republican Left candidate.
http://manuelatrasobares.blogia.com     ES.WIKIPEDIA.