Dario graduated from the New York School of Visual Arts in 1965, and started doing drag at Halloween. He advanced to the drag balls and private parties. He was 6’2” (1.88m) and specialized in a simple black dress. 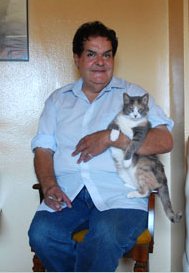 He normally went to the Stonewall Tavern on Saturdays in the late 1960s, but happened to be there on Friday June 27, 1969 when a police raid developed into a riot. He went to hospital and had six stitches.

He worked in fashion, designing lingerie and evening wear, and was one of those behind the brief paper dress of the late 1960s.

He finds that there is no longer anyone to do drag with, and has not done it since 1996. Since retirement he has become a tenants rights activist.