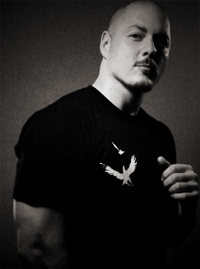 Jack Donovan was originally from Pennsylvania. He was a New York go-go dancer during the 1990s club-kid scene, and has been an artist.  He has lived in various US cities, and has settled in Portland, Oregon.

As Jack Malebranche, he was an ordained priest and media representative for the Church of Satan for many years.  He resigned this position, on good terms, in 2009.

As Malebranche he wrote the provocative book, Androphilia, A Manifesto: Rejecting the Gay Identity, Reclaiming Masculinity, in which he proposed masculine, indeed masculist, homosexuality and separation from the gay scene and stereotypes.  He uses the word ‘androphilia’ in a special way, such that most gay men are not encompassed by it, and we should also mention that most gay men  would not identify with his portrayal of 'gay'.


“The word gay has never described mere homosexuality. Gay is a subculture, a slur, a set of gestures, a slang, a look, a posture, a parade, a rainbow flag, a film genre, a taste in music, a hairstyle, a marketing demographic, a bumper sticker, a political agenda and philosophical viewpoint. Gay is a pre-packaged, superficial persona—a lifestyle. It’s a sexual identity that has almost nothing to do with sexuality.”

He in fact develops 'androphilia' as a gender variation although he does not use such a concept. In particular he does not explain how male androphilia is different from male autoandrophilia or male homeovestity.
Returning to his original name of Jack Donovan, he has been active on alternateRight.com and the anti-feminist/men's rights blog, Spearhead.  With Nathan Miller he wrote Blood-Brotherhood And Other Rites of Male Alliance in which he distances himself from gay marriage, which he says carries too much historical baggage, and proposes alternate models for male-male coupling.

As an over-gendered man, one would presume that he had no interest in trans people.  However he has written several essays particularly on trans women.  His concepts of trans women are pretty stereotyped and would seem if anything to derive from his time as a go-go dancer, much as Bailey's concept of HSTS trans women is also derived from hanging around gay bars.


“Well, actual transsexual males are a whole different ball of wax–they tend to be really scrappy. Despite the fact that they imagine themselves to be women, a lot of them would not think twice about throwing hands. They’re a very confused and angry bunch, in my experience.” (Oct 2009)

“generally drag queens, trannies and transsexuals in all stages of transition were not well. They were often addicted to drugs, had been diagnosed with mental disorders or chemical imbalances, and many had at one point routinely engaged in prostitution. …

Female transsexuality is a different ballgame; it seems to be almost entirely a feminist tom-boy fantasy and it is difficult to separate from feminist politics. At some point I will write something titled ‘Chaz Bono is Still a Fat Chick’, but today is not that day.  …

It is worth noting, too, that many of these individuals occasionally engage in deceptive behavior, ‘hiding’ their birth sex from potential sexual partners. It’s not just a comedy cliché. It happens, and it’s ethically reprehensible. (Dec 2009).

“a large number if not a majority of male-to-female transsexuals were mentally unstable, and that feminists and cultural Marxists were doing these men harm by convincing them that they should try to become something that they could never truly be: women.” (May 2010).

There is much in common between the HBS people and Jack Donovan.   Both advocate heteronormativity, and both are dismayed by the variety and difference found among both gays and trans people.

Pretty big breeches for a go-go dancer... no? Oh wait, he worked for Satan!

Ahhhh no, that's a misconception: Anton LaVey added some ritual malarkey to warmed-over "Objectivism" and dedicated it to Stan. Oops! I meant... Satan! So Mr. D, pardon, Mr. "Malebranche", no it's Donovan again, had a job as a sales rep for the world's least popular "religion".

Clearly, this is THE DUDE who has been designated by the Forces of History to SAVE CIVILIZATION... eh, from, you know, effeminate males, and women, who, much to the perplexity of all right-thinking males, suffer from the strange "idea" that maybe right-thinking males lack the Divine Right to crush them at will... ???

Feh, the guy had a job (?) courtesy of some ripped off Rand, and he's bitching about uppity women?

I have no problem with the Church of Satan as such. I think that Anton LeVay even spoke up for trans persons on occasion.

If you think that the Church of Satan is Satanic, I suggest that you do not know what it is.

"world's least popular religion". May I suggest the Westboro Baptist Church or the Wahhabi.

I don't have any problems with Lavey, really, the Church of Stan... whups! Satan! is kind of amusing. Lavey admitted that he borrowed a lot of his ideas from Ayn Rand, and I largely approve, having been deeply influenced by her writings myself... and I'm fully aware that labelling his "religion" with "Satan" was a kind of joke, and I kinda-sorta (but not really) approve of the whole thing as a reasonably sophisticated means of dodging taxes... ?

... and I claimed it to be the "world's least popular 'religion' " ... Lavey wasn't aiming for popularity anyway, or Religion, so more good on him!

OTOH, having Donovan serve as a spokesperson sure doesn't reflect well on their competence. Which might be considered important, if you're trying to claim that you're (somewhat) superior to the run-of-the-mill human...