Christoph Josten was born in Rech an der Ahr, Rheinland. He took his drag name from the Swiss beverage powder (known as Ovaltine in England). 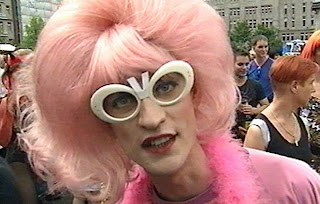 Ova lived in Berlin and was a regular MC at gay street parties. In 1990 she publicized violence against queers. In 1997 she managed a program on 100 years of gay movement at the Berlin Academy of Arts.

In the 1998 election she stood for the Bundestag and received 534 votes.

She had been HIV+ since 1992. She was active in Act UP, with Aids charities, marijuana legalization, legal rights for prostitutes and transgender visibility.

She died of lymph cancer. In the last year of her life she promoted for a memorial for gays persecuted under the Nazis. The memorial was erected in 2008.