George Harris Jr was born in Bronxville, Westchester, New York. His family moved to Florida and lost their money in real estate.

On return to New York, child George worked as a model in commercials, and at Caffe Cino and other off-off-Broadway theaters. At 13 he left home to live with an older man, with the understanding of his parents. One of his contacts was Jack Smith, the avant-garde filmmaker who was already cross-dressing his actors. 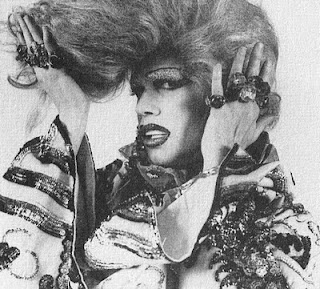 At 17, George had an offer to drive to California, and arrived in San Francisco in time for the Hippy thing. He grew his hair, became vegetarian and wore robes and headdresses. At midnight on December 31, 1969, The Palace, let him, as Hibiscus, and several others put on a show and the Cockettes were born. They put on periodic reviews using castoff junk for their props, and dressing in drag and as whatever they liked. They attracted the attention of celebrities, and were featured in articles in Rolling Stone and Paris Match.

One night after a performance he came home to find that his apartment building had burned down. He took a break, but on return found that he had been voted out of the group, and that shows were no longer free. He founded a new group, Angels of Light, which did their first performance in Grace Cathedral before the police evicted them. Allen Ginsburg did his first drag with the group and was was Hibiscus’s lover for a while.

Hibiscus left the group and returned to his family in New York, and started an East Coast version of the Angels. They were discovered by Swiss choreographer, Maurice Bejart who financed a European tour.