Malcolm Michaels, Jr. grew up in Hoboken and Elizabeth, both in New Jersey. Malcolm would transform to Marsha on the commuter train into New York. 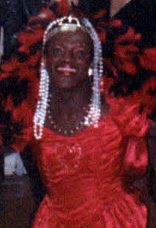 In 1966, Marsha moved to Manhattan for good. She was well-known in New York drag and arts scenes from the 1960s to the 90s. Sometimes she worked as a waitress, but usually she worked the streets. She was known for helping other transvestites and street people, was regarded as a drag mother, and in particular was a mentor to the young Sylvia Rivera. She panhandled and was often on roller skates. She was deeply religious and had visions.

In the early days she was known as Black Marsha, but then dropped the ‘Black’, and became Marsha P. Johnson. The P. as she loved to explain, including on one occasion to a judge, stood for “Pay it no mind”. The judge laughed and let her go.

She participated in the Stonewall riots in 1969, where she was observed dropping a heavy weight onto a police car. She was co-founder with Sylvia of STAR (Street Transvestite Action Revolutionaries) and was active in STAR House which attempted to feed the homeless and the street transies. 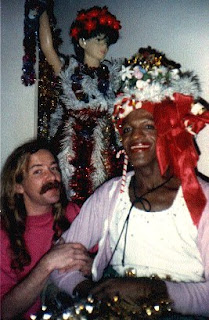 She was also a performer and a member of Hot Peaches, and did a London tour with them. She never got a female passport, and had to do male drag to go through immigration. She was photographed by Andy Warhol.

By 1979 she acknowledged several attempts on her life by johns, eight nervous breakdowns and innumerable arrests – after one hundred she stopped counting.

Marsha was rightly regarded as generous through the decades, but when Malcolm took over he could be quite nasty, and might even pick a fight with someone who said hello to him.

Marsha was probably murdered: her body was found floating in the Hudson River shortly after the 1992 Pride March, but the police declined to investigate.