Uys was born in Cape Town, the son of a Calvinist Afrikaner father and a Berlin-born Jewish mother. He was active in theatre in Cape Town and Johannesburg in the 1970s and 1980 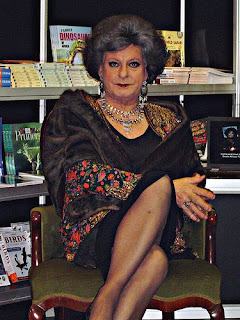 s. He has written and performed 20 plays and over 30 revues and one-man shows.

In 1976 his soon-to-be major persona, Evita Bezuidenhout, ‘the most famous white woman in South Africa’ appeared. Inspired by Barry Humphries’ Dame Edna Everage, she was used by Uys to satirize and expose the absurdity of the then Apartheid regime. Most of their work was not censored, indicating closet approval by members of the ruling class. They also lampooned the sometimes hypocritical white liberals.

Evita published her autobiography in 1990. After the first non-racial elections in 1994, Evita starred in a television series interviewing Nelson Mandela and other politicians.

Pieter and Evita are also active in HIV/Aids campaigning, especially in teaching Aids awareness to children. In 2001 they gained a Truth and Reconciliation Award.

They live in the town of Darling outside Cape Town where Pieter has converted the old railway station into a cabaret.

In 2009 they wrote a play MacBeki: A Farce to be Reckoned With, which satirized contemporary politics reading Duncan as Nelson Mandela, Jacob Zuma as Macduff and Thabo Mbeki as Macbeth.