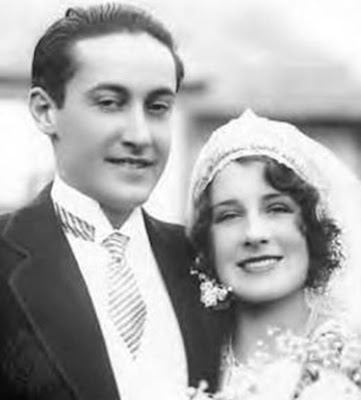 Thalberg, born in Brooklyn, NY, was the outstanding movie producer of the inter-war period.. 'The Boy Wonder', the model for Scott Fitzgerald's The Last Tycoon, Irving Thalberg worked his way up the ladder to be executive producer of Universal City by the age of twenty. He left this position to become the first Vice-president of MGM in 1924. He died of heart attack and pneumonia at the age of 37.

Shearer, born in Montreal with a RCMP cop for a father, was a rising star at MGM when she married the boss. She was nominated for Best Actress Oscars six times.

Irving and Norma were recreational transvestites. Flamini's 1994 biography says: 'Because he carefully watched what he ate, Thalberg's frame never varied, and Norma's dress size fitted him well, as did her shoes. One of their private jokes was to dine together by candlelight wearing each other's clothes, Thallberg in an Adrian creation complete with makeup, Norma wearing one of his suits.'