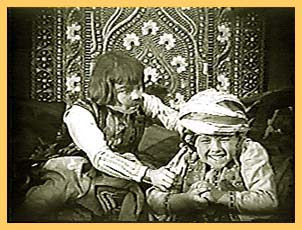 Violet made her first film at age 6, her last at the age of 10, and was dead at age 18. In 5 years, from 1914 to 1918 she made 34 films. She finished her career in Fox's Sunshine Kiddies films, children's stories with most parts played by children, in which she played male villains.
She was Prince Rudolpho in Jack and the Beanstalk, 1917, the evil magician, Al-talib in Aladdin and the Wonderful Lamp, 1917, the Robber Prince in The Babes in the Woods, 1917, Long John Silver in Treasure Island, 1918, and the Chief Executioner in Fan Fan, 1918.

This comment is not particularly intended to be an advertisement, but MovieArt Original Film Posters in Austin, Texas has acquired the only known example of a one-sheet poster (27x41) for LITTLE DICK'S FIRST CASE (1915), a short film featuring Violet Radcliffe. This poster was presented in REEL ART, the premier book of film posters published by Abrams (1988). Violet Radcliffe made over thirty films and in many of them she played male roles.

This poster can be seen at our Google Plus Page.