Success at the Lutherstrasse 30 encouraged Konjetschni to find larger premises, and he opened in the former Grand Cafe Luitpold early in 1928. Both Lutherstrasse 30 and Motzstrasse 15 were open, and many customers visited both. Marlene Deitrich and other celebrities were sometimes seen here. The “HIER ISTS RICHTIG!” banner was now outside. 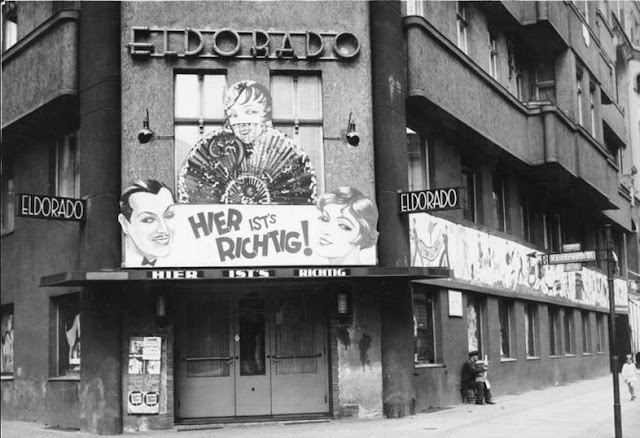 1929. Sinclair Lewis’ novel Dodsworth, takes the eponymous character on a Berlin pub crawl. In an unnamed transvestite bar, probably Eldorado: “And there was a girl in lavender chiffon – only from the set of her shoulders Sam was sure that she was a man”.

Mugette was a star performer. Her photograph by Elli Marcus was featured in Der Querschnitt 2/1931.


1930. “Our Excursion to ‘El Dorado’” by French writer Bernard Zimmer, Le Crapouillot, 23. He visited both locations. “The life of these “transvestites” is interesting to observe: Most live in couples with a thousand jealousies and intrigues. Some are small-time prostitutes, others husbands, and a few are fathers with families. And the prostitutes are treated like members of any other respected profession.” “The other Eldorado [on Motzstrasse] is more elegant. Sophisticated types spend the evening there for the performances and to savour a bottle of German champagne. On a small stage, some danseuses in tutus twirl on point: Again transvestites. (Many are from Paris.)”

Another observation from a Berliner: “You’d see always famous people there, like Max Pallenberg. Not much of a show, but the most fascinating thing was ... you had lesbians looking like lesbians with short hair, lesbians looking like beautiful women, lesbians dressed exactly like men and looking like men. You had men dressed like women so you couldn’t possibly recognize they were men, it was so realistic. Then you would see couples dancing and you wouldn’t know any more what it was “. 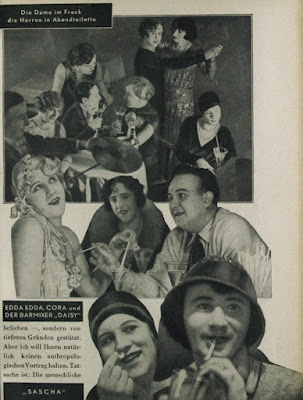 September 1931, the Berlin journalist, Rumpelstilzchen, took his visiting provincial uncle Artur to the Eldorado. Artur did not understand the gender of the persons, but found them to be stunning.

The English journalist Denis Safton Delmer, was friendly from previous visits with Ernst Röhm, commander of the Sturmabteilung (SA). Röhm took Delmer to a restaurant and then on to Eldorado. One of the hostesses came over uninvited and chatted with Röhm about a party a few days previously. Delmer made a comment about about how no female hooker would talk like that to a previous customer in front of a stranger. Röhm  snapped: “"I'm not his client. I'm his commanding officer. He's one of my SA men. "

Michael Fry, son of White Russian Paquita Louise de Shishmareff, who blamed Jews for both Capitalism and Communism, visited with revulsion. In his 1934 Hitler’s Wonderland he blames gay decadence on the existence of Hirschfeld’s Institute, and beyond that as a Jewish plot to undermine German culture: “ The corrupt administration of the cities did not censure the Institute, so why should it forbid Pervert-Clubs, Homosexuality Leagues or ‘Daisy’ Bars?” (p19) “Now that your eye is trained, you can pick out fifty of these ‘Daisies’ at a glance-most of them are rather unattractive. That is because we are in the ‘Eldorado’, the popular resort. For those who can afford them, there are smaller, more exclusive night-clubs, where you find no creatures with rough chins dressed in imitation Paris models. There you would see the cream of the "Daisies" -the beau-monde of homosexuality­ - the better class of male prostitutes of which Berlin, Hamburg, Stuttgart, Munich, Cologne, etc. are full.”

May 1932. American Vogue attempted a send-up of the Eldorado. A reporter goes in search of Berlin’s most perfect female. Measuring everything from shoes to nose length, the reporter fails to find a suitable woman in the grand hotels, in the chi-chi cafés. Finally he checks the Eldorado, where a trans woman meets his criteria. However the Berlin that the article described was already over.

July 1932, new Chief of Police Kurt Melcher began implementing the strict Catholic policies of the new Von Papen government and announced “an extensive campaign against Berlin’s depraved nightlife”.  All “amusements with dancing of a homosexual nature” were now subject to an earlier closing time of 10pm and many bars and dance halls turned themselves into private clubs in an attempt to sidestep the new laws.

October 1932 Chief of Police ordered a ban on same-sex couples dancing in public.

Fearing for his family and livelihood, Ludwig Konjetschni closed the Eldorado and handed the premises over to the local Sturmabteilung (SA) – many of whom had worked for him and he placed his future in their hands. The SA turned the Eldorado into their new local headquarters. 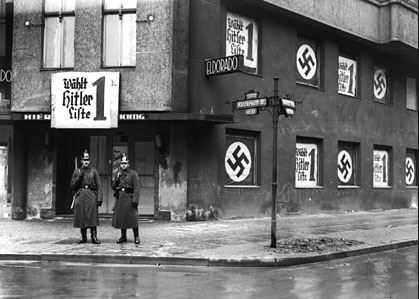 January 1933 Hermann Goering ordered the closure of gay bars, and gay men and transvestites were routinely arrested and imprisoned.

1933. Ossy Gades was working as a man at the DéDé Bar on Bülowstraße. It was part-owned by a Sturmabteilung (SA) Lieutenant and, by 1934 renamed the Bülow-Krug. Despite this Gades was arrested several times and beaten for having dressed in women’s clothes. He explained that he was not homosexual, and went out en-femme only when accompanied by his wife. He was still regarded as homosexual.

July 1933. Despite his gift, Ludwig Konjetschni was not safe. He and his family fled Germany.
30 June/1 July ex-Eldorado customer, Ernst Röhm was deposed, arrested and executed by his own Nazi Party. The Night of the Long Knives.

May 1935. Ossy Gades was sent to Lichtenburg concentration camp. This camp was one of the first and housed mostly political prisoners and gay men. He died there a year later.

1935. Christopher Isherwood. Mr Norris Changes Trains. A novel based on his experiences set in pre-Nazi Berlin, and with scenes in Eldorado.

Storer says that Wyndham Lewis’ visit to Eldorado was during his 1921 visit to Berlin; Woods opts for Lewis’ much shorter 1930 visit. I have gone with the former.

Cabaret Berlin and Mel Gordon disagree on opening dates. I have gone with the earlier in each case.

Unlike Paris' Le Carrousel, only 15 years later, we do not know many of the names of those who worked in the various Eldorados.

Also unlike at Le Carrousel, the performers were not able to take female hormones.   Hormones were being developed during the 1930s, by German, Bristish and US scientists, but did not become available until after the Second World War.  See Adolf Butenandt.
Time: 08:54