Adolf Butenandt was raised in Lehe, near Bremerhaven, the son of a businessman. The first from his family to go to university, he studied chemistry at Marburg and Göttingen, and graduated PhD from the latter in 1927. He was politically active from 1925 in the Jungdeutscher Orden, a party then opposed to the rising Nazi Party. His thesis was supervised by Adolf Windaus who was awarded the 1929 Nobel Prize for work on sterols.

From 1927 until 1930 he was Scientific Assistant at the Institute of Chemistry, Göttingen. He and his assistant Erika von Ziegner worked with the pharmaceutical company Schering AG, which collected human pregnancy urine, and then mare’s urine. They isolated the estrogen hormone oestrone in pure, crystalline form, almost at the same time that E.A. Doisy did this in the US. Erika and Adolf married in 1931, Erika giving up her career, but raising five daughters and two sons.

From 1931 until 1933 Adolf was Privatdozent in the Department of Biological Chemistry at the University of Göttingen and acting Head of the laboratories for organic and inorganic chemistry. Schering AG had an arrangement with the Berlin police to make daily deliveries of men’s urine totalling over 17,000 litres. Butenandt and Kurt Tscherning distilled this and obtained 50 mg of androsterone, in pure, crystalline form.which they found to have a chemical formula very similar to oestrone.

From 1933 Butenandt was Professor of Chemistry at Danzig Institute of Technology, where he succeeded in isolating Progesterone in the female ovary in 1934. This was partly financed by the Rockefeller Foundation, as was his two-month trip in 1935 to Canada and the US, where he met all of the major North American scientists in his field. Shortly after his return to Germany he was offered a chair at Harvard University, which he declined.

In 1936 it was requested that Butenandt join the Nazi party, and the same day that he did so, he also became director of the Kaiser Wilhelm Institute for Biochemistry in Berlin. His predecessor, Carl Neuberg, who was Jewish, was dismissed for that reason alone. From androsterone Butenandt obtained testosterone in 1939, a compound which had been first obtained from the testes in 1935 by Ernst Laqueur. By 1938, based on Butenandt’s pioneering work, scientists at Schering AG, Hans Herloff Inhoffen and Walter Hohlweg, synthesized ethinyl estradiol – this was approved by the FDA in the US in June 1943, and became the basis of the vast majority of birth control pills and hormone therapy into the 21st century.

In January 1938 word reached England that Schering had applied for a patent on ethinyl estradiol. A team under Charles Dodds at the Courtald Institute of Biochemistry at the Middlesex Hospital (where Hans Inhoffen had worked a few years earlier) combined with a team under Robert Robinson at Oxford. A crash program led to the synthesis of Diethylstilbestrol (DES). A chemist on Dodd’s staff, Wilfred Lawson, developed a formulation, and Leon Golberg, an Oxford student performed the actual synthesis. Dodds published the formula in Nature. It was not patented but given away, and quickly produced by over 300 pharmaceutical companies, thus depriving Schering AG of royalties.

Butenandt was a staff physician of the Luftwaffe from 1942, and helped develop a hormonal solution to counter sudden drops in pressure at high altitudes. Otmar Freiherr von Verschuer was director of the Kaiser Wilhelm Institute for Anthropology. He believed that blood could be analysed to determine race. He was the supervisor of Josef Mengele who supplied non-consensual blood samples from over 200 inmates of the Auschwitz concentration camp. The blood was analysed by a member of the Biochemistry Institute. Historians have discussed to what extent Butenandt knew that the blood was taken from concentration camp inmates. In addition, selected inmates at Auschwitz were fed liquid estrogen. It was simply poured into the daily soup. The women stopped menstruating, and the men lost their sex drive.

Butenandt was awarded the Kriegsverdienstkreuz (War Merit Cross) Second Class in 1942, and First Class in 1943. To escape the allied air raids, the Kaiser Wilhelm Institute for Biochemistry was transferred to Tübingen in 1944. Butenandt became Professor of Physiological Chemistry at the University of Tübingen, and the Kaiser Wilhelm Institute was lodged with the Institute of Physiological Chemistry there. 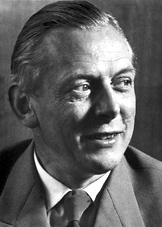 From the end of the war until June 1947, Butenandt was listed as wanted in the US occupation zone, but he was treated as a Nobel Laureate in the French zone which included Tübingen. As early as November 1945 he was in Basel for financial discussions with the La Roche pharmaceutical company. In 1946 he visited Paris and met with the Académie de Médecine. In September 1948 he was offered a chair at the University of Basel, but turned it down. Butenandt was able to claim his Nobel Prize in 1949.

He was able to pull strings so that von Verschur was not prosecuted as a war criminal, and while von Verschur was never again an Institure director, in 1951 he was appointed a professor of genetics at the University of Münster.

In 1960 Butenandt became President of Kaiser Wilhelm Institute, now renamed the Max Planck Institute. He retired in 1972, but continued as Honorary President.

In 1984 Benno Müller-Hill published Tödliche Wissenschaft: die Aussonderung von Juden, Zigeunern und Geisteskranken, 1933-1945 which accused Butenandt of knowingly collaborating with von Verschuer and Mengele. Butenandt refused any serious discussion of the issue, and that was that.