As Wayne Dynes says in his Amazon review, there is little that is new in this book compared to the books on the topic published in the 1970s and 1980s, other than it being written assuming a social constructionist view. However now it is more than a generation later, and the older books are rather hard to find. This book is easy to read and covers the evolution of gay and trans Germans from Karl Ulrichs (the first to use the expression anima muliebris virili corpore inclusa - a female psyche confined in a male body) in the 1860s to the Nazi destruction in 1933.

Beachy studied German history at the University of Chicago, and is now an associate professor in South Korea. Unlike the writers in the 1970s he does not care to tell us whether or not he is gay, although one presumes that he is from his expressed sympathies.

Of the retold material there are two themes that I would like to emphasize. While paragraph 175 of the Prussian legal code which prohibited sodomy was imposed on all of Germany after unification in 1871, at least in Berlin the police regarded blackmail as a more serious crime, and in some cases prosecuted the blackmailer while letting the gay man go free. In this respect it was easier at that time to be gay in Berlin than in London. Secondly, the social construction of bisexuality was radically different from that of today. It was regarded as normal for a heterosexually married man to have a male lover on the side, as opposed to modern opinions like this article in Xtra that concludes that both gays and bisexuals are rather rare.

So far, so good. What does Beachy have to say about trans persons? He does discuss quite a few and I have already used some of his material in this blog.

Following a long tradition, Beachy claims that Magnus Hirschfeld coined the term 'transvestite': "Hirschfeld coined the term based on his experience of Berlin Cross-dressers" (88); "his own neologism" (p170). How many times does this misinformation have to be refuted before writers cease to repeat it? I went through the evidence back in January 2010 and showed the term in use back to the 16th century. If Beachy is not willing to condescend to read my blog, he should at least ask himself why the Paris police were issuing permissions de travestissementa full century before Hirschfeld arranged for the Berlin police to do the same. Failing that a quick perusal of the word in the longer Oxford English Dictionary should settle the issue (which is where I started). 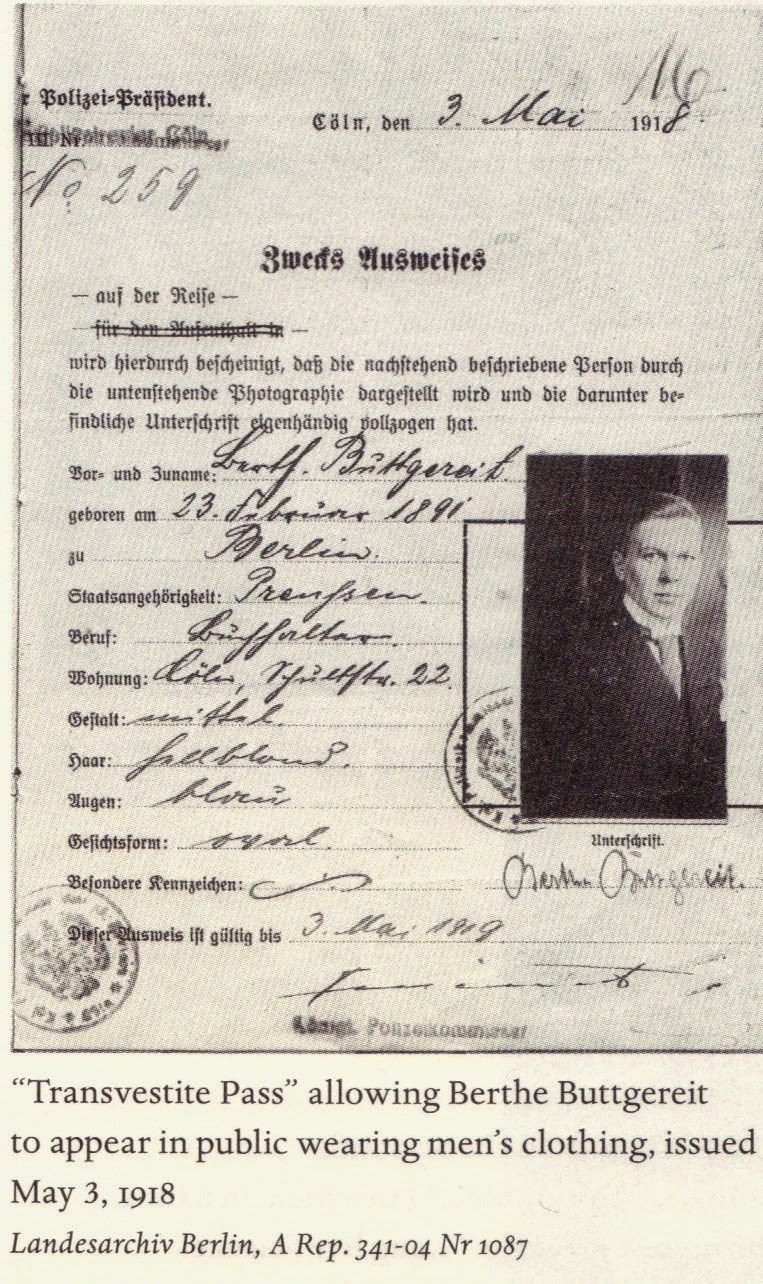 Here is an image on the fourth page of the illustrations. Despite the Fraktur font and the old-German handwriting you should be able to make out that it is an identity card for a trans man called Zwolf Buttgereit. Beachy refers to him only as "Berthe Buttgereit".


I have already featured Gerda von Zobeltitz, whom I did not know about before reading Beachy. Beachy (p172) refers to her only as Georg van Zobeltitz, although I was able to find her real name online within minutes.

Incidentally there is no entry in the book's index for either Buttgereit or Zobeltitz. I have come across this in a few other books: patients are not real people like doctors and are left out of the index. That is just plain rude.

On the other hand the account of Richard  Mühsam's experimental transgender surgeries is probably the best in English so far - it is more detailed that the account in Meyerowitz' How Sex Changed. But there is no mention at all of the major transgender patients in Berlin during this period: Carla van Crist, Toni Ebel, Dörchen Richter, and Lili Elvenes (Elbe). The 1931 article by Felix Abraham that discusses the operations of Dörchen and Toni is in the bibliography but is used only as a citation for a minor point.
Time: 11:38