Vicki took her surname in homage to Susan Strasberg, the daughter of Lee, the famous acting teacher.

Vicki was 6 feet (1.8 m), on hormones and gorging on food to be plumper and more sexually desirable, when she met photographer Diane Arbus in 1969. She lived full-time as a woman, and none of her sex customers had ever complained. She was ogled wherever she went. 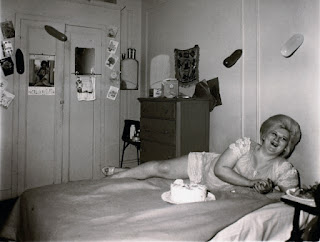 Arbus commented: She had "the most unbelievable walk. I couldn't see the man in her."

Vicki knew how to use a knife, tortured her cats and once had stabbed a customer. For that she was sent to the Tombs jail.

Vicki took to Diane and gave her presents (which she had stolen from department stores). Vicki invited Diane to her birthday party, and Diane found that she was the only guest.  But she took one of her best known photographs.